It’s been a week and I can’t stop thinking about this. Time to spread it around. 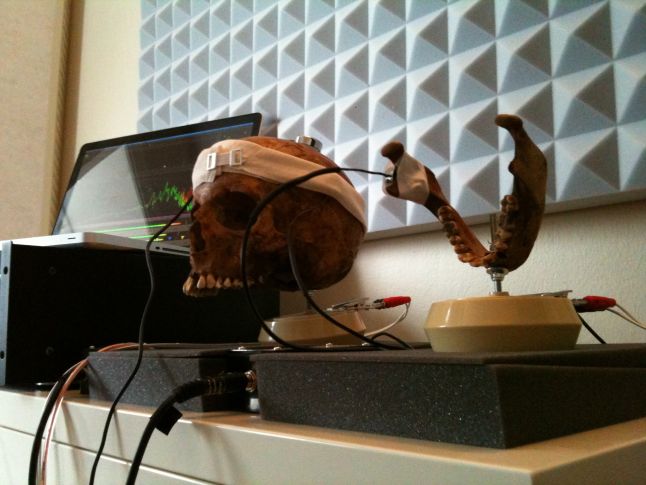 Inside is a great game. Building on the same foundation as Playdead’s debut, Limbo, it’s as close to perfect as a game can ever be in this imperfect world.

A lot of its appeal is the atmosphere, and it turns out that’s as deliberately crafted as the rest of it – of course. But one aspect of just how that atmosphere was created may surprise you, because it involves, uh, a real human skull.

In a deep dive published on Gamasutra last week, Inside sound designer and composer Martin Stig Andersen explained that he was inspired to get a real human skull involved with the recording process because of the way your voice sounds so different inside your head than to other people.

“A large part of what you hear is your voice resonating inside your body, in your jawbone for example,” he wrote.

Andersen wanted to recreate this effect, so he “acquired” a human skull to play around with. He doesn’t say how, but I assume it involved cash and not murder.

In a departure from his usual style, Andersen embraced synthesised sounds, because he felt the game’s aesthetics called for something like 1980’s B-movie “cheap yet cool” soundtracks. But he also didn’t want the indie’s sound to be overtly reflective of this inspiration, rather than Inside’s unique world.

Enter the skull. When Andersen took his synthesised sounds and the music composed by Inside co-composer SØS Gunver Ryberg and “played them through a skull, the sounds acquired another quality”.

Even before post-processing, the skull lent the music a “kind of timbre”, and once Andersen was done tweaking it, it became “a bit creepy and cold”.

“Eventually all the teeth fell out of the skull because of the vibrations, but while they were still there they created this small vibrating sound that I think was unsettling but also strangely familiar to people. Because we all know it, in a way,” Andersen commented.

Do go check out the full blog post, which I am still thinking about daily a full week later, for the detail on how Andersen got the skull working as a filter, and why he was inspired to try such a thing. There’s nothing about who the skull belonged to, or what they might have thought of this use for their earthly remains. He does say the skull will be displayed in his studio moving forward, though.

As for Andersen, he’s “very happy with the results of working with a human skull”, but doesn’t expect to use it again.

“In the future I’d like to work with the tools of electronic surveillance, like highly-directed microphones and things like that. I think that could be very fun to work with,” he said. I wonder if this tells us anything about Playdead’s next project?

I don’t normally read developer blog post and post-mortems, but then again very few of them are about skulls. Consider this a hot tip for at least one extra page view, devs.

Inside is available now on PC, PS4 and Xbox One.