A little more time with this game reiterates what we thought before: it’s pretty damn good. 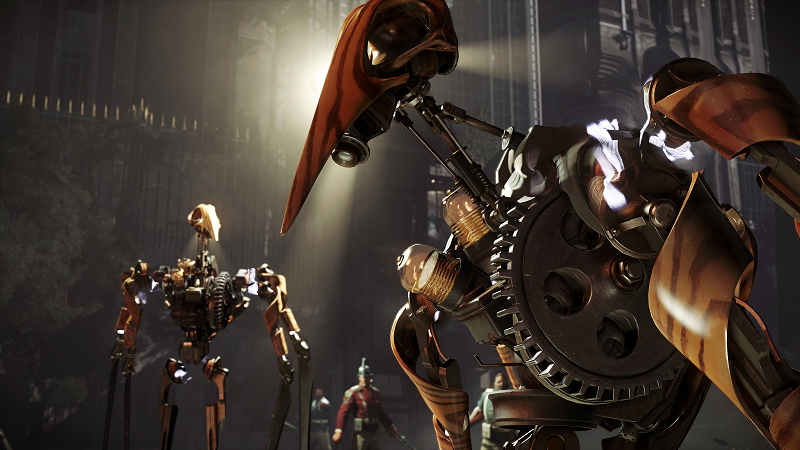 Attentive readers of the site will likely remember that a couple of weeks ago Matt and I posted a joint hands-on with Dishonored 2. EGX was the first place in the world people were able to go hands-on with the title, and we made a point of hitting up that stand first. We were the first people there. We liked it a whole lot.

You can read our impressions from back then in the article we published the same day, but the short version is that Dishonored 2 impressed. Matt played Corvo and I played as newly playable heroine Emily, and we both tackled the level in relatively different ways. Shortly after Bethesda offered us a chance to get hands-on again in a less time-sensitive environment at their offices. We took them up on the offer.

This presented a fun opportunity: it meant I could go and look at Dishonored 2 from a completely different angle. While we were limited to twenty to thirty minutes at EGX, here I had a couple of hours. The build was identical and limited to the clockwork mansion location, but I chose to play in two very different ways.

In the first run I picked Emily again and tried to pick the level apart. I explored every hidden corner I could find (which, let’s be clear, wasn’t everything) and then eventually solved the little mini-puzzle that allowed me to take out my target non-lethally.

In my second run I used some of my knowledge gained from the previous run to try to blast through the level as quickly as possible as Corvo. This led to a fifteen-minute run where I did the level’s objectives in a more open-ended manner. When you rescue a friendly face, for instance, the game encourages you to deliver him back to safety before going after the target. I ignored this, instead carrying him with me right to the target’s office. I dropped him in a side room and then headed in to perform the assassination, then made my escape with my unconscious friend in tow.

“The nature of the design of Dishonored 2’s clockwork mansion seems built to make the level a sequence-breaking dream with a vast number of opportunities.”

The game also expects you to walk up to your target’s office at the start of the level and have a chat with him through a locked door. Here he learns your identity, but as Corvo I simply avoid this scene entirely. He knows I’m coming, but in this instance doesn’t know who I am.

Where in my first play-through he taunts Emily directly and by name having seen her at the doorway, in my second he taunts the anonymous stranger with a hint of concern at the fact that he doesn’t know quite who they are. This is a nice touch. I’m later told there’s even a way into the mansion without alerting him to your presence at all.

None of this non-linearity is new, of course. In fact, it’s really a staple of the genre to which Dishonored belongs. With that said, the nature of the design of Dishonored 2’s clockwork mansion seems built to make the level a sequence-breaking dream with a vast number of opportunities. I discover an entirely new way into a key area very late in my time with the game, and I discover it backwards – for me it becomes an escape, but it could just as well have been an entrance. Even after two hours, I was still discovering stuff in this tiny slice of the game.

We know that many major locations in Dishonored 2 will have some sort of differentiating mechanic. Here it’s the transforming clockwork rooms, but we’ve also seen the time travel gimmick in another level at E3. If each works as well as this level, these are exciting touches.

Anyway, you’ll find above a video I’ve cut together of me talking about the game and some gameplay of me hacking and warping my way through some parts of the mansion. I could’ve had a fourth trek through the level, but I decided against it – I’m pretty sold on Dishonored 2, and I don’t want to spoil any more of the final product. Roll on November.