War: What is it good for? Pretty, pretty mushroom clouds.

A couple of days ago I posted my first Civilization 6 play-through feature, where I detailed the road to my first ever victory in the game, which was a religious victory where I led Japan to make their religion the dominant cultural force in the world. Today, here’s something a bit different: all-out war.

This game of Civilization was one that dragged on quite a bit, and it was a particularly turbulent, war-torn world. A few Civs on another main continent were wiped out before I ever met them. On my continent, I was forced to wipe out Greece after they started an unjust war against me that I could never quite forgive.

At this point in the game I was actually well on my way to a scientific victory, but I’d been stockpiling nuclear weapons for some time mainly to see if the AI Civs began to beg and plead with you out of fear once they realize your level of firepower as in Civ 4. They didn’t do that, but I’m not quite so sure if that’s because they don’t have that behavior any more or if they all still hated me because of my war against Greece – I wasn’t very popular, at any rate.

I was suddenly faced with a difficult dilemma. I was on the cusp of a science victory, but it’d take me a good few turns yet. However, Spain was being very aggressive with their religion and a religious victory might be within their grasp. (I still fear religion may be a little OP.) I also really just wanted an excuse to see how the nukes looked. The stage was set. 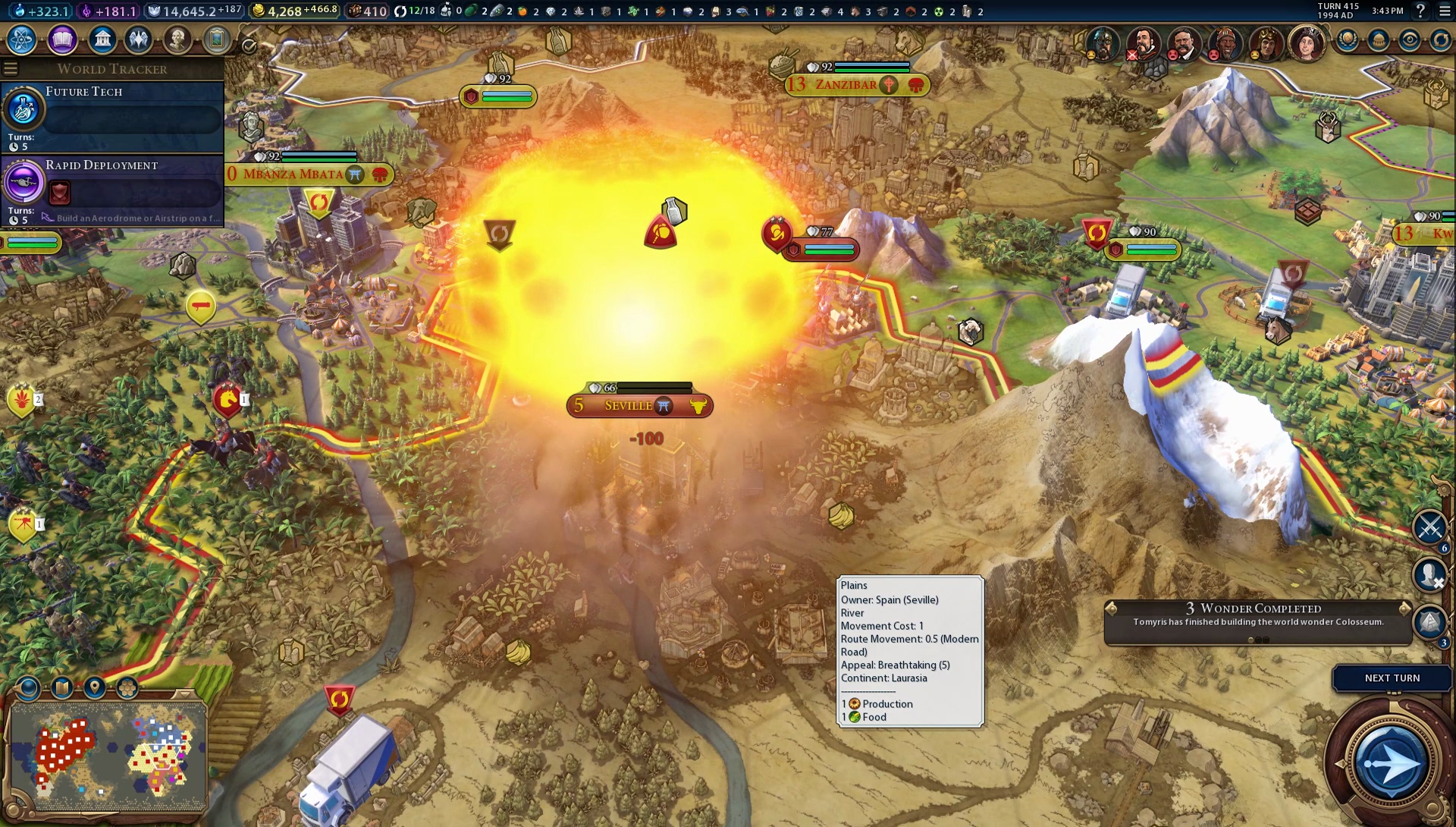 “I really like this system – it makes the penalties for going to war seems fairer and encourages players to find a justifiable ‘reason’ for the war.”

In Civilization 6 the penalties for starting a war feel more severe. Being seen as a warmonger will significantly damage your relationship with other Civs for the entirety of a game. Because of this, the game asks you to justify the war through a Casus belli – a reasoning for why you want to go to war.

If a Civ and you have no real reason to hate each other, all you’ll be able to do is declare a ‘Formal War’. This’ll carry heavy penalties. If they’ve attacked you before and hold a city that was once yours, you could instead declare a war to liberate that city. This carries a much lower penalty than going to war for no reason. If a Civ has attacked or taken over an allied city state, you can do the same. You could also declare a holy war on a Civ that doesn’t share your religion and so on.

There’s a number of different casus belli that are unlocked alongside Civics as you progress, and each has a different level of warmonger penalty with other Civs which in turn will significantly impact how you go forward once the score is settled and the war over. I really like this system – it makes the penalties for going to war seems fairer and encourages players to find a justifiable ‘reason’ for the war.

In this instance I declare a Colonial War; Spain is two generations of technology behind us, and thus the reasoning for declaring war is to bring their people up-to-date. I sort of do the reverse, though, as I then launch three nuclear weapons and annihilate three of their four cities. Whoops! Sure looks cool, though.