Osiris: New Dawn’s take on sci-fi survival will get an Early Access launch in two weeks. 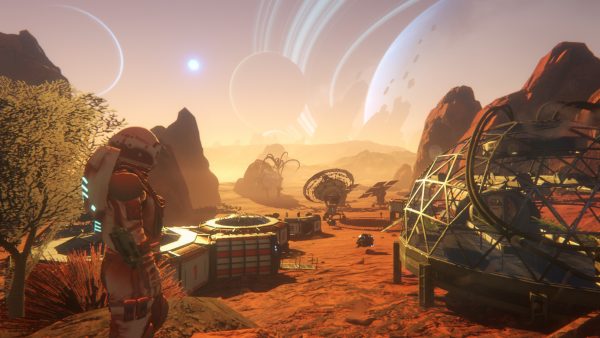 No Man’s Sky, while heavily anticipated, hasn’t exactly had the best launch, as proven when Sony’s Shuhei Yoshida himself was knocking the developer’s PR chops. Yet that doesn’t change the fact that fans crave a space exploration game which feels expansive and meaningful – and if Brian McRae has its way, it might be here sooner than you’d think. Developed by the two-person team Fenix Fire, Osiris: New Dawn is a sci-fi survival game arriving on Steam in two weeks, with gameplay Polygon compared to the hugely successful Ark: Survival Evolved.

Osiris is set forty years in the future, where humans are finally taking their first steps into interplanetary travel. Two factions are currently colonizing the stars – one led by the United Nations, the other by Outlanders who prefer a pirate lifestyle. After crash-landing on a deserted starting planet, players learn to hunt for resources, rebuild their dropship, and assemble a basecamp before heading back into the stars to rejoin their chosen faction.

According to Polygon, while Osiris will launch in Early Access its finished version will include Scientist, Marine, and Engineer classes which support various playstyles. Players can equip all kinds of futuristic technology, from rechargeable laser pistols to rocket boots. Osiris will also include a modular building mechanic that lets you design a base for customizable vehicles and starships.

Planets are populated with their own indigenous species, each containing AI that behaves in believable ways. “If they’re wounded as they’re going along and if the creatures have a line of sight, they actually see the rock and then they know to path-find around it and hide,” McRae told Polygon. “They also know how to flank, just like the velociraptors in Jurassic Park. One of them starts to attack, and the other ones will go around.” McRae hastens to add that players don’t have to kill every alien – they can also tame them, and ride across the landscape.

Polygon’s full preview goes into more detail, but it seems the demo alone goes a long way towards offering an experience No Man’s Sky fans found lacking. More promising is the fact that McRae himself isn’t a newcomer to gaming: He was the environmental artist for StarCraft: Ghost, and designed several Oculus Rift products in the time since. At the very least, that explains why the screenshots look absolutely gorgeous, which gives me hope for the finished game.

Osiris: New Dawn launches for Steam Early Access on September 28, 2016, and will head to consoles at a later date.