Figuring out the best gaming mouse for you is no simple task these days. There are gaming mice for almost every occasion, made by a variety of manufacturers, each with their own gimmicks and gadgets to show off. Is DPI more important to you than design? Would you prefer a showpiece to functionality? Do you want something to give you the edge in online shooters, or are you more interested in MOBAs? With so many gaming mice on offer these days, we’re going to help you find the best gaming mouse with a list of some of our favourites. We’ll be constantly adding more of the best prices over at Jelly Deals, as well. Let’s get started. 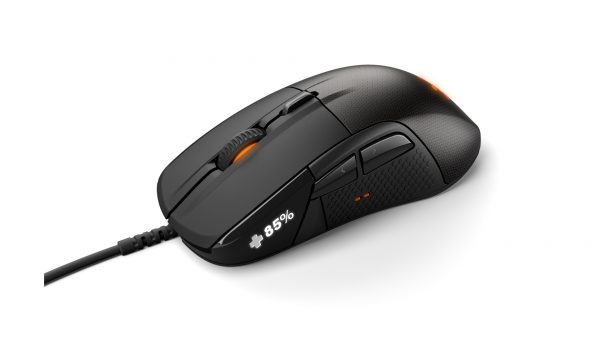 SteelSeries’ Rival 700 gaming mouse may be the second most expensive mouse on our list, but is a clear example of the old adage – “You get what you pay for.” This little guy has a DPI of up to 16,000 and features a modular design, meaning you can snap different covers over the framework to your heart’s desire. These are, of course, sold separately.

Most curious about this particular mouse,  though, is the little black-and-white OLED display installed into the side of the device. This is a unique feature, designed to display information from supported games (the mouse currently supports three games – Dota 2, Counter-Strike: GO and Minecraft) as you play. Alternatively, you can set it to display sweet animated gifs. I know which one I’d rather have. The OLED display helps differentiate this mouse from practically any other gaming mouse on the market. It might be a gimmick, but it will be enough of one to win over more than a few people.

Along with the animated gif side-panel, the Rival 700 is loaded with gaming-related features that set it apart from the rest of the market. For example, there is support for tactile alerts. These alerts will come in the form of vibrations in the mouse itself, timed to when the player is in danger, low on health, or in need of something in-game. It might sound a little crazy, and it is, but it makes the Rival 700 all the more unique and all the more desirable. 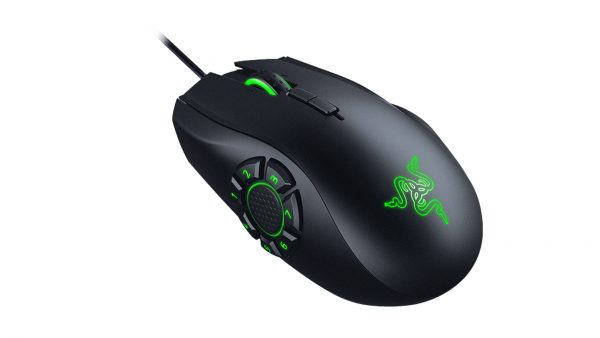 If you’re someone who plays MOBA or even MMO games, this one might appeal more to you. The Razer Naga Hex V2’s key feature is fairly evident from just a quick glimpse – the side of the mouse is host to a seven-button mechanical thumb-wheel. That’s seven whole buttons to program however you please, depending on what game you play most.

The upside to this is that it makes this mouse magnificently programmable, with few limits to be found in the number of choices. The downside here, is that the side-mounted buttons being arranged in a circle means you’ll have to train your brain to remember where these buttons are (and which one is which) without constantly looking down at your hand while playing. This will take a little bit of time, as is to be expected, but might just be worth it.

Aside from the gluttony of programmable buttons, the Razer Naga Hex V2 also features full Chroma RPG lighting, adding a little bit of style and colour to the soft glowing LED lights on the top and sides of the mouse. It’s also lightweight, making it a breeze to glide across a mouse-pad or gaming surface. There are even MOBA-specific profiles for games to map buttons automatically, including League of Legends and Dota 2. 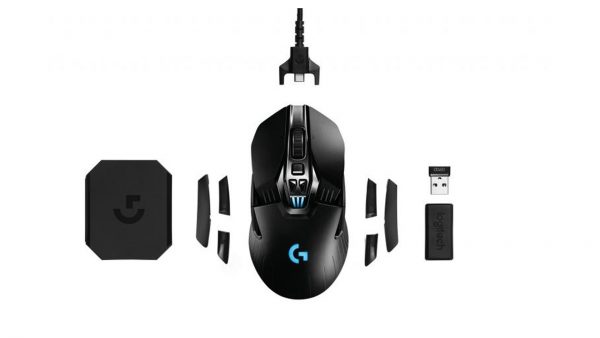 Now we’re stepping into the higher end of the gaming mouse spectrum. The Logitech G900 Chaos Spectrum, to be precise. The G900 is a wireless gaming mouse that has a tendency of putting all other wireless mice to shame. This little guy all but eliminates any trace of lag present in most previously available wireless mice, features a scaling DPI (between 200 and 12.000) settings and an ambidextrous design. It’s not often that mice or gaming mice feature any one of those features, let alone all three.

It also features the same RGB customisable lighting that most of the mice on this list also feature, modular side buttons to accommodate all hand sizes, shapes and playing styles. There are eleven buttons available, across the entire mouse, including the modular ones, so there’s no shortage of versatility on offer here.

The battery life, in case you were wondering, of this wireless mouse sits around the thirty-hour mark, but the G900 can be used while charging, in effect just becoming a wired mouse temporarily at these times. If your wants or needs for a new mouse have included the attribute of “wireless”, this is the one to pick. Put simply, it leaves almost all other wireless mice in the dust. It may prove too pricey for some, but for others, it will be the mouse they spend the next decade using. 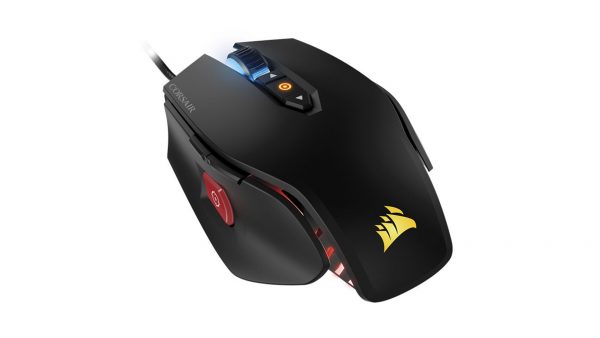 If your budget doesn’t necessarily allow for fancy wireless mice or ones with programmable button wheels, then the Corsair M65 Pro may be a bit of a more realistic choice. At under £50, it enters the lower half of this list in terms of price but delivers some serious performance when it matters. The M65 Pro is a bit of a workhorse of a gaming mouse, with many features all packed into one relatively affordable mouse.

Firstly, this mouse has a DPI of 12,000 which will make gameplay smooth and easy to use, while the overall design of the M65 Pro, including its “Aircraft-grade aluminum structure” makes it an incredibly comfortable mouse to hold, especially for longer gaming sessions. Also present is a three-point weighting system for some customisation opportunities, a “Sniper” button on the left-hand side and a multi-coloured DPI switcher.

Speaking of lighting, that’s something that Corsair haven’t neglected when making a cheaper mouse. It does indeed feature a full RGB range and can cycle through a wide range of colours.

With eight buttons on offer here, the M65 Pro will cover a vast majority of the gaming situations you’ll encounter, and it will do so with ease, all while continuing to be a comfortable pleasure to use. Not at all bad for a sub-£50 gaming mouse. 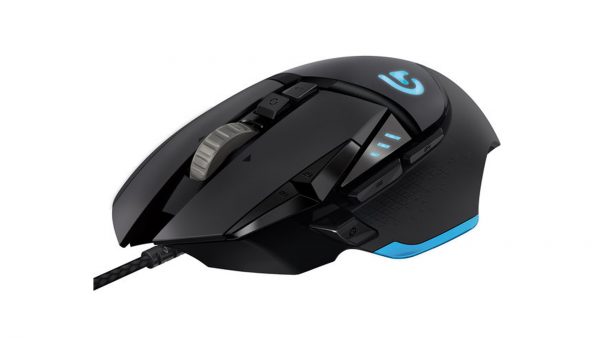 Like a lot of the mice on this list so far, the Logitech G502 Proteus Spectrum features the familiar features of programmable buttons (eleven on this model), a variable DPI of between 200 and 12,000 with a button-shift, customisable lighting and the ability to store profiles for different games.

The G502 Proteus Spectrum also features Logitech’s infamous weighting system, which lets you open up the hexagonal underside of the mouse and rearrange, add or remove a series of diagonal weights (up to six 3.6 gram weights) to give you the best feel. Depending on how you are prone to use mice, whether while playing a game or not, you can tailor the weight of the mouse precisely, between ultra heavy-handedness or a featherweight glide.

One final feature that separates the G502 Proteus Spectrum from the rest of the mice in this list is the unique button, just south of the scroll-wheel. This central button unlocks the mouse-wheel’s full scroll ability, removing friction and letting the wheel spin loosely. This will primarily be useful when working or using software (spreadsheets, for example), but there’s most likely a game out there where this could come in handy. 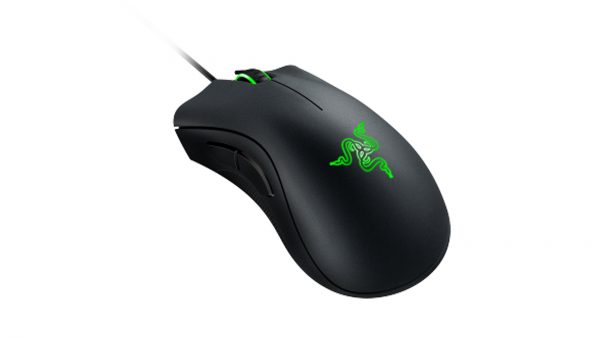 Razer is one of the most well-known manufacturers of PC accessories and peripherals, mostly of the gaming related variety. Whether you realise it or not, you’ve probably seen or used one of their products before. Razer’s DeathAdder Chroma is absolutely one of the most popular gaming mice on the market today and, to a large extent, it’s not difficult to see why. The DeathAdder Chroma’s design is sleek, uncharacteristically understated (Razer products are known for garish colour-schemes and stand out designs) and packed with features.

Those features include a native DPI of 10,000 with a 4G optical sensor, five buttons in total including a satisfying and responsive left/right click. A large, ridged scroll wheel that responds well to the smallest of movements. Perhaps most importantly, it’s a wonderfully comfortable mouse to use – it glides over a majority of surfaces with ease, it’s ergonomic design will fit comfortably in your palm, the rubberised side-mounted grips will keep your hand stable and in place, and the overall build is solid and satisfyingly put together.

Missing, somewhat, is a weighting system mostly seen in Logitech’s range of gaming mice. The DeathAdder Chroma comes in at a slightly heavier default weight than most other mice on this list (105g), which is not distracting in itself, but may end up making some users struggle with some early usage. Razer does, however, offer a left-handed version of this mouse and there are precious few left-handed gaming mice out there in the world.

There are lots of little details that have gone into the DeathAdder Chroma and Razer’s prolific nature means that sooner or later, we will likely see a newer version of this mouse with further improvements, as they continue to fine-tune for perfection.

So there we have it, some of our favourite gaming mice available today. Of course, this is just a selection of what’s out there, it is by no means a definitive list. More and more of these lovely gaming mice find their way out each day. Sure, the SteelSeries Rival 700 has a tiny OLED screen and the Logitech G502 Proteus Spectrum has an intricate weighting system, but who knows what the next gadget will be. Improvements keep being made, technology advances, and prices fall over time. One thing is for sure, I’ll be over at Jelly Deals finding the best prices for the best products, so be sure to visit us there before taking the plunge on a brand new gaming mouse.