How to give Adam exactly what he asked for. 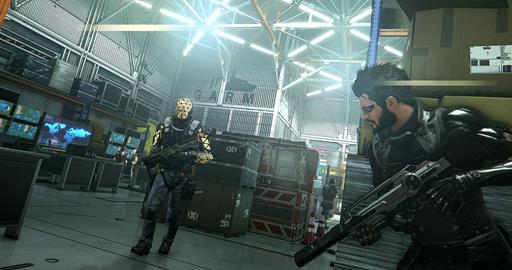 Be aware that this page contains spoilers for the final mission of Deus Ex: Mankind Divided. Have you left Prague for the third and final time, after police take firm control of the streets there? If not, we’d advise you don’t read on.

Deus Ex Mankind Divided: How to get the best ending

Okay, so. Hello, spoiler-willing people! The final mission of the game in London sees Adam faced with a terrible choice:

The game is a little cheeky: it presents this to you as a one-or-the-other choice, but if you’re quick, it’s actually possible to do both.

When you’re first presented with this choice you’re next to Miller, who is in a bad way. If you speak to him again, you have the opportunity to use the Orchid antidote on him if you have it from choosing the bank over Allison. This will save his life, but will also in turn impact what you should do next. Read on:

If you go to stop Marchenko first:

You’ll have ten minutes from the moment you regain control of Adam to get to Marchenko and stop him. If you take too long to get to him, Marchenko will pull the trigger and kill the innocent people unknowingly sitting on bombs.

If you saved Allison back in your second visit to Prague you’ll have the Bomb Jammer device; this can be used to buy yourself some extra time.

You’ll want to run all the way to Marchenko. You’ll find him in the convention centre’s main hall. The entire place has been booby trapped to hell and back – there’s lasers, turrets, drones, mines and of course the man himself, heavily augmented and able to take quite the beating.

If you’re playing non-lethally keep in mind it is possible to take down Marchenko without killing him. My strategy was to stealthily sneak around the room deactivating all his traps, then heading up to some high ground where I could repeatedly snipe him in the head with my tranq rifle. You’ll see him get stunned when he’s hit – this isn’t just a stun, but it does have a deeper impact. It’ll take a lot of tranq shots, but he will eventually go down. Another great way to take him down is by popping him with EMP via grenade, tesla, stun gun or EMP ammo to stun, then running in close for a physical take-down.

If you’re aiming to kill Marchenko you can actually cut the entire boss fight short with a special item – his ‘Kill Switch’. It does exactly what you think it’d do. This can be found in a room with a lone guard and a computer in the area just before you find Miller; this item is in a weapon box that’s hidden underneath a desk and behind some sports bags.

Remember that time is of the essence. If you take too long here, by the time you run across the convention centre to where the delegates are based you’ll find they’ve all been poisoned by the Orchid. Here’s a little more on that:

If you go to save the Delegates first:

The politicians are mincing about as they’re want to do, shaking hands and chatting, and so they actually don’t get to the toast that sees them drink the poisoned wine right away. After around 10 minutes from you heading off to help them they’ll begin to drink.

Much as with Marchenko and his bombs, an item from an earlier optional mission can help you here. If you chose the bank over the bomb maker back in Prague you’ll have an Orchid antidote. After ten minutes the delegates will be poisoned, but they won’t be dead. You have an opportunity to thus save them with the antidote. After a little more time still they’ll actually be dead – so time is important.

If you get through this section quickly enough however Adam will barge in and prevent them from drinking at all. This is the ideal outcome.

What I did to get the best ending

There seems to be a little more nuance to the ending than is currently entirely clear, but what we do know so far is above. I did get the best ending first time however and without any assistance. Here’s how I did it:

Need more Deus Ex: Mankind Divided help? Check out our page on where to kick off every side mission here, how to save Singh in the first mission here, more on the choice between saving Allison and robbing the bank, or our tips page here.

Obviously there’s a lot of factors around this ending, but for now here’s what what we know. Do you know a little more? Did you get the ending in a different way? Let us know in the comments below.