No Man’s Sky provides almost everything you need even before you leave the first planet, if you’re willing to put in the time. 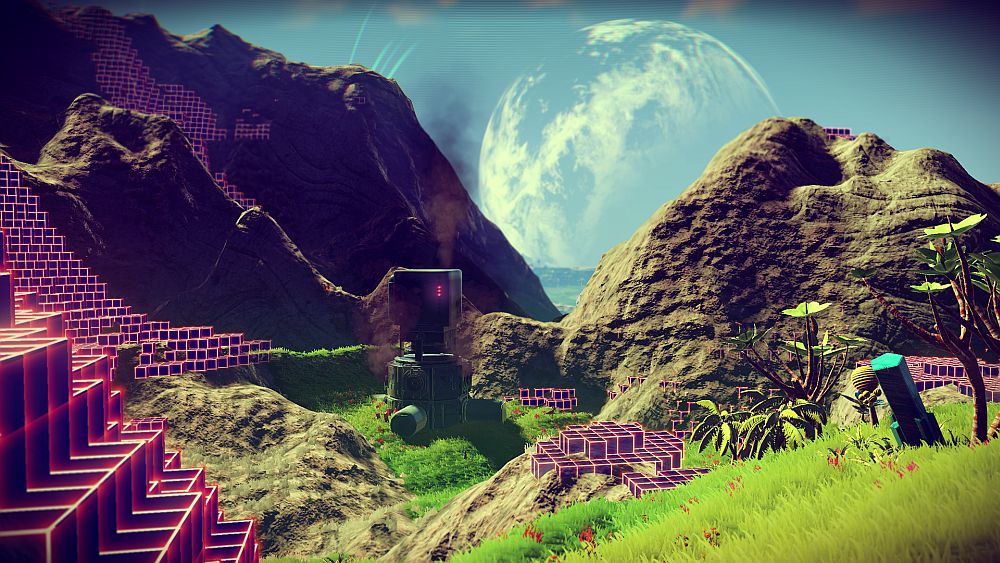 No Man’s Sky has 15 quintillion planets, but for the most part, you can get everything you need right from the get go.

Just like the player who maxed out their inventories on their first No Man’s Sky planet, you too can find everything you need on the sodding enormous procedurally generated landscape around you.

Not what you’re looking for? Our No Man’s Sky guide has plenty of other tips and tricks.

All you need to get started is a stack of Bypass Chips and a map beacon. Bypass Chips are easily crafted in No Man’s Sky – you only need 10 Iron and 10 Plutonium, which you can gather by mining rocks and red crystals, both of which are found in large numbers on every planet. You have the recipe from the start of the game, too.

As for map beacons, these can be found near structures, and are easily identified by the orange beam of light they shoot upwards. The easiest way to find one is to get into your ship and fly slowly and low to the ground, rotating the camera until you see the blue question mark indicating a point of interest in No Man’s Sky. Investigate these and you’ll rapidly find what you’re looking for as long as you’re low enough to see the buildings clearly.

Interact with a map beacon to spend a Bypass Chip, and then interact with it again to bring up its interface. You can then choose a point of interest type, and No Man’s Sky will cheerfully point you to whatever you’re looking for.

Each map beacon will populate your map with loads of waypoints before it is exhausted, and you’ll usually find a new one as you explore the options the first one gave you. Visiting every waypoint you unlock will lead you to alien interactions with quest rewards, upgrades, blueprints, crashed ships and much more – and there’s so much on each planet that you’ll soon have almost everything you need, and can trade for the rest at outposts.

It’s important to save your game at each point of interest by activating the central marker; doing so ticks the area off as discovered, which means the map beacon won’t highlight it for you as a potential new discovery.

Also, you should go explore the Point of Interests after you have about a couple of each kind you want; the waypoint system seems to max out at three per type, and won’t maintain new ones after that.

Here are some examples of how you might put this trick to use:

… but in general visiting any Point of Interest brings its own rewards.

Thanks to the perfidies of RNG, it’s entirely possible that you will find a number of key crafting recipes and blueprints just by mechanically visiting points of interest. The Atlas Pass blueprint and Suspension Fluid recipes, for example, are key items most players unlock by following the Atlas quest of No Man’s Sky – but they may also just appear for you if you search long enough. All things are possible in an infinite universe, and No Man’s Sky is as close to infinite as to be indistinguishable from it.