Abzû fits very neatly into genre we don’t have a name for yet, because it’s mostly occupied by its cousin Journey. 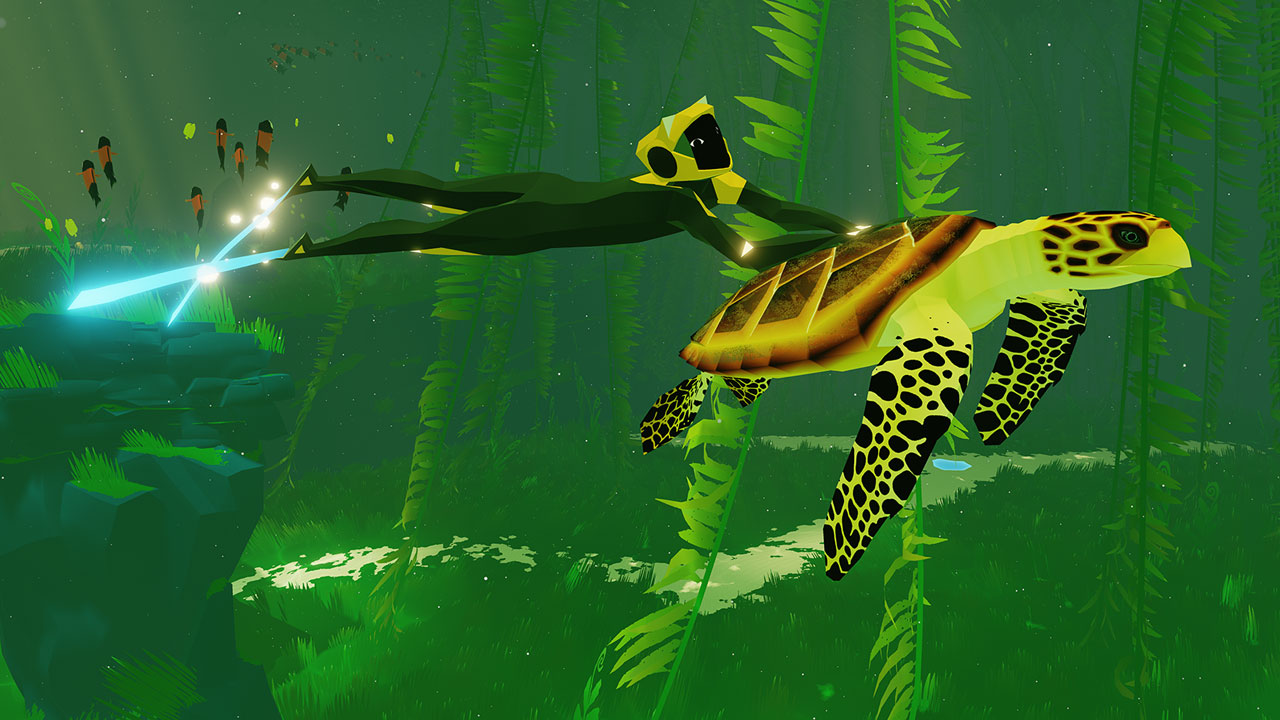 Abzû comes to us from some of the same talent as Journey, ThatGameCompany’s glorious desert adventure. It’s the product of Giant Squid, a studio founded by Journey (and Flower) art director Matt Nava, with an orchestral soundtrack from Austin Wintory, who served the same role on Journey.

There were some absolutely wonderful moments in Abzû that made me exclaim in delight, my heart welling up with pleasure at the beauty of the sea.

That’s not all the two games share, though. Calling Abzû an underwater Journey is a perfectly fair description, in the same way Mario was name-dropped whenever you talked about platformers back in those days: when a game is such a perfect example of its type, it becomes the byword for its genre, at least for a while – and especially if there are so few rivals.

So how is Abzû like Journey? Well, you control a stylised humanoid figure who ventures through beautiful environments dotted with the ruins of an ancient, abandoned civilisation with advanced or at least unfamiliar technology. Sometimes you need to solve simple puzzles to proceed. There are optional collectibles. Sublime moments are accompanied with emotive music.

It’s not just that, though. Abzû echoes Journey’s, uh, journey, almost exactly. I won’t describe the sequence for fear of spoiling either game, but the narrative arc is near-identical, hitting the same emotional peaks and troughs at much the same time, with only one real point of differentiation. This isn’t a negative criticism, merely an observation; it’s a simple enough story that you could argue many games fit the pattern. But like, when you press the square button your character does a little chirp, just like in Journey, and at one point you even – well, anyway, spoilers. Let’s just say, if Giant Squid didn’t want us to compare this to Journey, it did nearly everything wrong.

Journey is great and there should be more games like Journey, so let’s now talk about what makes Abzû different. Obviously, being underwater is the biggie, and that has pros and cons. Even after adjusting the camera settings, a thing you should do right out the gate, I never felt like piloting my little swimmer around was as fluid (heh heh) as I would have liked; there’s a little bit of lag before the camera resets, or something, and if the direction your character is facing is unclear – which happens frequently, due to distance and lack of contrast with the environment – it’s all too easy to go shooting off in the wrong direction.

Because swimming has momentum and inertia, getting back on the right path can take a few moments. There are also times when your little guy heads up or down unexpectedly for no particular reason I could discern, because there’s an invisible barrier, or beacuse you’ve just glanced against a wall, and that combined with the other control issues makes things more frustrating than they should be.

This is a real shame, as it’s my only complaint about Abzû, which is otherwise lovely. I think if Abzû had been incubated inside Santa Monica with Sony’s apparently endless patience and budget, it might have been as perfect a gem as cousin Journey, to which it will always be compared unfavourably.

If you can look past the control issues, which most people will, the underwater world of Abzû is simply delightful. The environments are as gloriously beautiful as you’d expect from Nava, who has done wonderful and admirably restrained things with the huge palette available in a marine setting. In most areas you can locate a statue where you can park your wet little butt down and meditate, which allows you to switch between different creatures in the area and observe the scene at your leisure. (Finding and using a meditation spot allows you to return at will to take another look, too.)

It’s worthwhile doing so, because the sea life around you is magnificent. I’m not really interested in fish except in close proximity to chips, and yet I was fascinated by the variety and always eager to see what would be on show in the next room. I was never disappointed in this regard. You can grab hold of and swim with some of the larger creatures, which is rad; some, like dolphins, will tow you wherever you please (do experiment with this) but others will fight you.

Each has its own particular mode of movement, too, and as a Survive! Mola Mola fan I was reduced to helpless laughter by the ungainly sunfish, which regularly dies because it is too clumsy to avoid swimming into walls. (This is a true thing, bless ’em.) The optional collectibles or secrets actually add to the life around you, and I do wonder what happens if you get them all, as they mostly seem to release predators. Second ending..? Hmm!

In short, it’s pretty gorgeous down there – screnshots do not do it justice – and as wonderful a setting for an emotional exploration game as Journey’s deserts. It’s a short game, so maybe not for everybody’s budget, but there were some absolutely wonderful moments in Abzû that made me exclaim in delight, my heart welling up with pleasure at the beauty of the sea. Highly recommended.

Abzû is available digitally for PC and PS4.