This summer has seen no shortage of excellent Xbox One deals. Thanks to the brand new Xbox One S release, the older style console has fallen into some very affordable territory. We’ve tracked down the best Xbox One deals and will be updating this article regularly with the latest bargains. Here’s what we found.

We’ve scoured the best deals from both US and UK retailers. You’ll find the US links right below and if you’re a UK reader feel free to scroll down. Alternatively, if the PS4 is your console of choice you can head over to our best PS4 deals article instead.

US Xbox One Console Deals

The recently released Xbox One S is already seeing some fantastic bundles. This one, in particular, features the 2TB launch edition of the console with three games for only $50 more than the regular price.

One of the cheapest bundles we’ve seen is this “Name Your Game” bundle. It nets you a 500GB console and a choice of either Rise of the Tomb Raider, Forza 6, Gears of War Ultimate Edition or Rare Replay. All the codes you need are in the box, the choice of which game is up to you. This one will cost you $248.50 at present.

Meanwhile, if you’re not concerned with getting the latest, newest Xbox model, you can pick up an old style Xbox One from Amazon extra cheaply. This bundle, in particular features a 1TB console with digital copies of Gears of War Ultimate Edition, RARE Replay & Ori and the Blind Forest. That’s a whole lot of games and the whole bundle will only cost you $282.32.

1TB Xbox One Console With Gears of War Ultimate Edition, RARE Replay & Ori and the Blind Forest – Only $282.32 at Amazon US

Of course, if you’re extra thrifty and looking save extra cash you can always pick up a refurbished console from Amazon directly. At the time of writing, you’re able to pick up a ‘Certified Refurbished’ 500GB Xbox One Console for just $199.99.

Certified Refurbished 500GB Xbox One Console for $199.99 at Amazon US

If you prefer your consoles to be pearly white you can pick up this 500GB White Xbox One with Gears of War Ultimate Edition for under $241.

White Xbox One 500GB Console With Gears of War Ultimate Edition for $240.99 at Amazon US

As for the new style console currently at Amazon, the Xbox One S is available in 500GB, 1TB, and 2TB versions, along with some bundles with games as well, each with a $50 difference in price.

Or, if you’re feeling particularly fancy, you can go ahead and pre-order the Gears of War 4 Limited Edition Xbox One S, which is due to be released in October. This thing is completely custom designed in a crimson red, with a controller to match. It’s a 2TB console too, so you should be set for a while. Pricey, though.

This one is, frankly, the best Xbox One deal we’ve seen in a very long time. Put together by Microsoft itself, this 1TB Xbox One console comes with Rainbow Six Siege, Rainbow Six Vegas, Rainbow Six Vegas 2, Halo 5: Guardians, Forza Motorsport 6 and a custom controller battery hatch with your gamertag etched in. All for £250. Truly, this is a deal you’re not going to find anywhere else.

Meanwhile, over at GameStop UK, you can pick up the Xbox One Elite console for the cheapest it’s ever been priced at – down to £279.97. The Elite console comes with, you guessed it, the Elite controller (which is around £120 on its own anyway), as well as an improved SSHD 1TB hard drive for faster load times. All in all a very nice package.

If you’re looking to pay the absolute minimum for an Xbox One and still get yourself a good deal, check this one out. A 500GB Xbox One console with a copy of The LEGO Movie The Video Game, all for £179.99.

Xbox One 500GB Console with The LEGO Movie The Video Game for £179.99 at SimplyGames

Alternatively, you can pick up this Xbox One 500GB console with a digital copy of FIFA 16 and a physical copy of Forza Motorsport 6 for just under £220.

If you prefer a good time travelling action adventure instead, pick up this 500GB console with a copy of Quantum Break for £179 if you use the code TDX-KHTX at checkout. 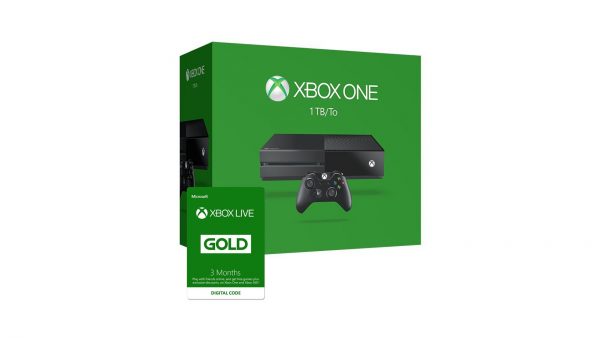 Right now, the cheapest way to get yourself a 1TB Xbox One is this bundle for £199.99 from SimplyGames. For that money, you’ll get the 1TB console as well as a three-month Xbox Live membership, which gives you access to monthly free games as well as multiplayer of course.

Xbox One 1TB with Three-Months Xbox Live Gold for £199.99 at SimplyGames

The second cheapest way you can get yourself a 1TB console currently is also courtesy of SimplyGames, where you can get this 1TB Xbox One with The Division for just £209.99.

Xbox One 1TB Console With The Division for £209.99 at SimplyGames

If you’re a fan of the fancy white consoles, GAME are currently selling their exclusive 500GB White Xbox One with a digital copy of Quantum Break for only £249.99, down from £319.99.

The Xbox One S itself is available for pre-order in its 2TB form over at Amazon.co.uk for £349.99. It’s been announced with a release date of 2nd August.

That’s all we have for now, but we’ll be constantly searching for more of the best Xbox One deals and bundles, so if you’d like to see more of the best game deals on the internet, check out Jelly Deals.