Two new Pokemon have been revealed in the latest issue of Japanese magazine CoroCoro. 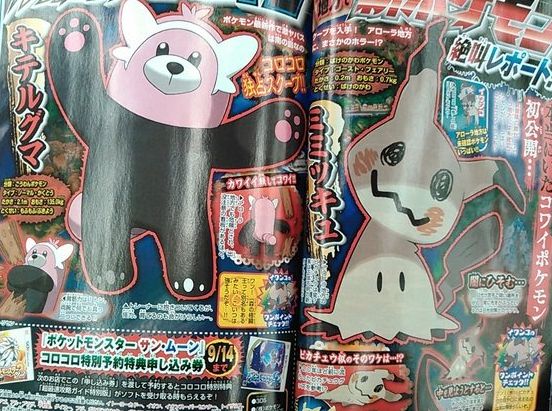 The Sun and Moon Pokemon shown in the scans are Kiteruguma and Mimikkyu.

According translations made by Serebii.net (via Nintendo Everything), Kiteruguma is a Normal/Fighting Pokemon who resembles a bear. It uses the abilities Fluffy and Klutz and can apparently “break anything in two.”

Residents of the Alola region are rather frightened of Kiteruguma, and have posted “warning signs” on the Pokemon. He is so strong it seems, that when he “hugs his trainer” it can endanger their life.

Mimikkyu is a Ghost/Fairy type Pokemon which uses an ability called Disguise. This particular Pokemon prefers the dark due to its hatred of sunlight. It is covered in a cloth allows the Pokemon to avoid the sun. Those who try to remove the cloth covering Mimikkyu will “become afflicted with an illness.”

We expect Nintendo to reveal more on these new Pokemon for Pokemon Sun and Moon later this week. Once everything is official, we’ll have screenshots and bios up for both.

The game is slated for release on November 18 in North America and on November 23 in Europe.

Be sure to bookmark our Pokemon Sun and Moon page for anything and everything you need to know about the next installment in the series. It is constantly being updated with new information.