Bungie is celebrating its 25th anniversary with a new Moments of Triumph line-up in Destiny. 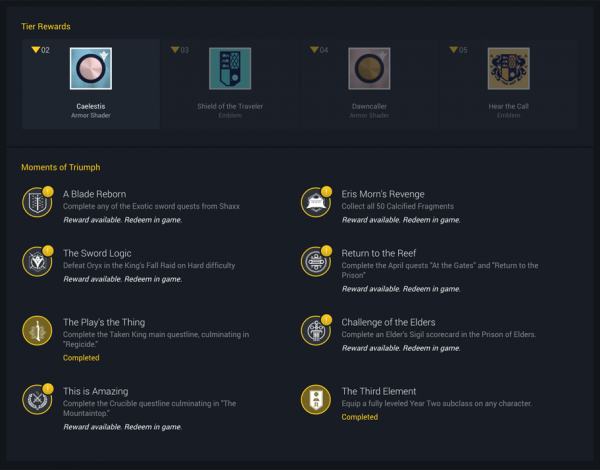 Destiny rolls out its second annual Moments of Triumph challenges

Not long after the rumors broke, Bungie has officially rolled out its second Moments of Triumph event.

In case you missed out last year, Moments of Triumph are a series of (admittedly arbitrary) end-game challenges that unlock exclusive armor shaders and emblems. Players taking part will have to complete a series of tiered achievements, eventually culminating in a final event on Felwinter Peak. Moments of Triumph starts today and runs until September 20, but requires The Taken King expansion to complete.

And what happens if you complete all the challenges? You’ll be able … to purchase an exclusive T-shirt. A little anti-climactic perhaps, but all proceeds will be directed to the Make-A-Wish Foundation and Seattle Children’s Hospital. Not a bad way for Bungie to celebrate its 25th birthday, I suppose!