Alienation is getting its first big update pretty soon. 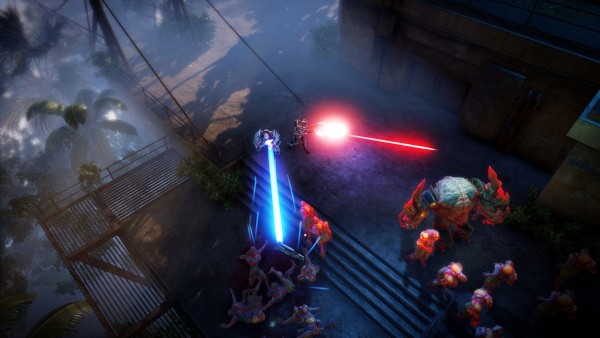 Alienation, Housemarque’s twin-stick co-op loot shooter, is due for a massive update on July 5. The new update, adds, among other things, local co-op for up to four players on the same screen.

You’ll have to fight over loot, though, as it’s not instanced. The main game will also be getting two new difficulty levels in Expert and Master, as well as new Hero levels. The Akrship mode is being updated as well to include new rooms, harder enemies, and better loot.

Another big part of the patch is the introduction of Leagues, which consist of five ranks. Each league cycle goes on for a week and allows you to climb leaderboards and unlock additional bullet colours.

Housemarque also announced two new add-ons. The Survivor’s Pack, and a season pass – both which will be available for purchase on July 5. This DLC pack includes the Vortex grenade, a new piece of gear with a unique modifier, and it makes all primary weapons available to all classes.

You also get three exclusive bullet colours. The Survivor’s Pack is price $6. As for the season pass, it’s priced $10 and includes access to the aforementioned Survivor’s Pack as well as the upcoming Conqueror’s Pack, Veteran Heroes Pack, the original soundtrack, and a dynamic Theme.

More released about other future content, free and paid, will be announced soon.