GTA Online got one of its best multiplayer modes in years this week, but you wouldn’t know it.

“A bonkers firefight that spews game-changing power-ups across the map, pulling the rug from under your ass as you attempt to dominate the other team of psychopaths.”

Overshadowed by the release of the fastest car in the game, this week’s GTA 5 update introduced the Power Play Adversary mode to zero expectations; everyone was too busy racing a $2.7 million supercar to give a toss.

Adversary modes in GTA 5 updates have been slowly improving, but the bad still outweigh the good like Jimmy De Santa on a seesaw. Hampered by the fact they’re quick modes in a game that technically can’t do anything at speed, it feels like you spend as long waiting for lobbies to populate as you do playing a three minute manhunt.

But bloody hell, Power Play is a bonkers firefight that spews game-changing power-ups across the map, pulling the rug from under your ass as you attempt to dominate the other team of psychopaths. It’s rad. 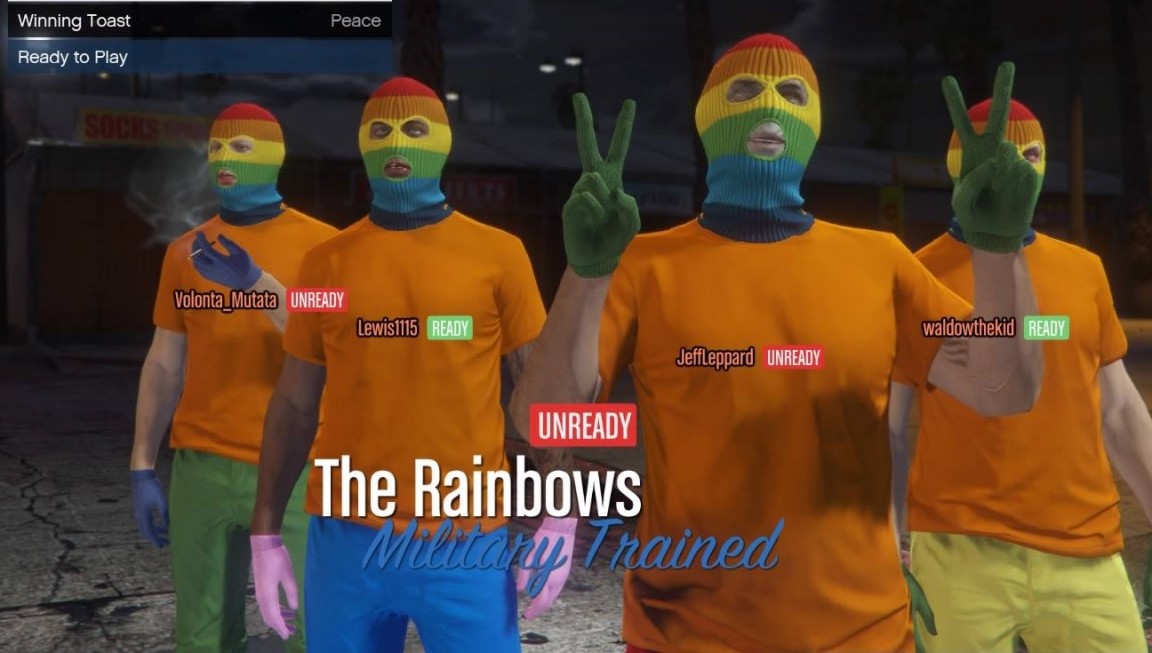 The power-ups are stupid and OP, and they’re meant to be. The rules of the game flip every few seconds, and you have to try and kill under the influence of swirling visions, reversed controls, a lethal werewolf and a team that just disappeared off the radar quicker than a black helicopter over Roswell.

It begins at what looks like a standard deathmatch, with teams suiting up as Cocks, Killer Bugs, Animals, Rainbows, Munchies and other seemingly randomised dayglow avatars. But as well as a handful of weapons, the map is littered with six different power-ups that players sprint through to activate for a few seconds. It’s here GTA gets as surreal as Michael’s first trip. Those power-ups are:

Each player can only use one power-up at a time, so there’s strategy involved in timing and stacking power-ups between team mates. Of course this is GTA, so teamwork can often go to shit in an instant, resulting in drugged, time-slowed shootouts against a rampaging beast, before someone flips the controls and fires a rocket propelled grenade into the nearest bin. Unpredictability is fun again.

A lot of GTA 5 updates focused specifically on Adversary modes have been rehashes of games the community has made themselves through the Rockstar Creator, but Power Play’s power-ups are something that we can’t do ourselves. And this is why it’s so welcome; we’re not games designers, Rockstar is. It can do much more than we can on a game it knows inside out.

Power Play reassures us that Rockstar isn’t just dropping expensive new items for us to buy in each GTA 5 update. Along with the very welcome gameplay that CEO missions and VIP work has added, it shows us they’re as much committed to new types of gameplay as they are free t-shirts and multi-million dollar yachts.

A lot of players want the new big thing instantly. They want to razz the X80 Proto around the streets of Los Santos and grab that free t-shirt on day one. That’s understandable, we all fiend for new gear and gun closets. My concern is that by focusing on this we tend to dismiss things like a new Adversary mode, where I’ve already had hours of fun without spending a bean. In fact, the current double cash and RP on offer make it more appealing.

But judging by the dropout rate of the lobbies I’ve played in, Power Play will end up as just another underpopulated and unloved mode. Even with double rewards it’s hard to find a playlist that remains full of players until the end – and that’s only days after release. Maybe Adversary modes are tainted by previously weak releases, but Power Play feels like a great addition overshadowed by apathy and a shiny new race car.