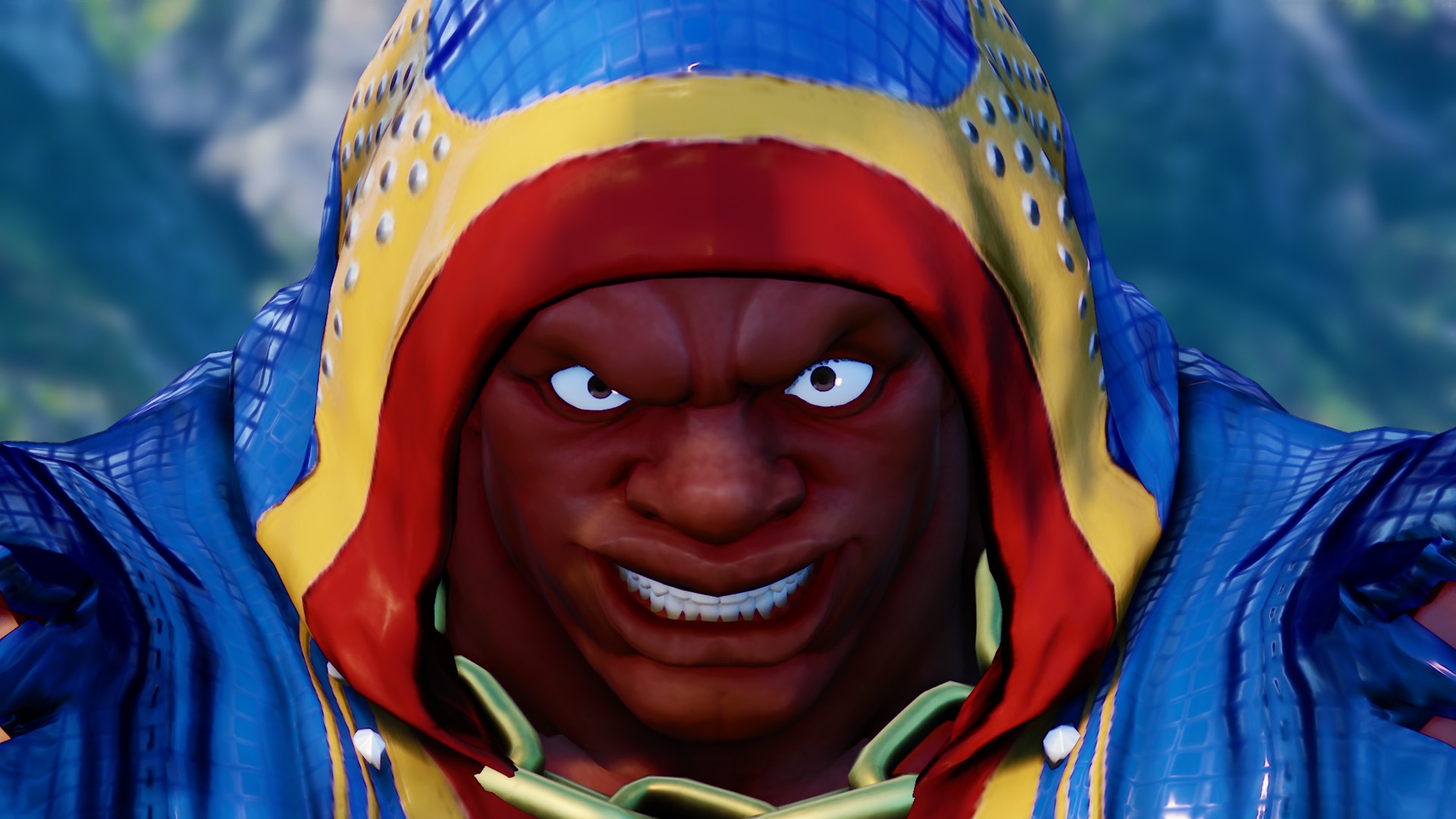 Balrog (M. Bison in Japan – they switched the names for legal reasons) or ‘Boxer’, as the SF community refer to him, is a hulking, deadly boxer who was expelled from the professional boxing circuit for being too violent. At that point he joined M. Bison’s organization.

His fighting style matches that of a professional boxer and of aggressive violence – heavy punches, deadly combos, and a very high damage potential. He’s a character that requires more patience in Street Fighter 5 than previous entries, but once you open the opponent up you can do serious damage.

Balrog’s V-Skill sees him twirl around in a forwards-moving spin. The spin will dodge projectiles if timed right. The timing isn’t too tight on this, so it’s easy to use. The real value in this move actually comes in what you can do out of it, however – a button press lets you perform a move out of it, and it can even be used mid-combo as a linker, since you can cancel into KKB from a special move. Cancelling into KKB from any special move other than the Screw Smash will increase the range of its natural follow-ups. In V-Trigger, KKB can be cancelled into even if a move is blocked.

Once Balrog’s V-Trigger is active, steam starts to rise from him, showing youi he means business. With this V-Trigger active Balrog gains the ability to chain together special and normal moves more easily, but he also gains access to two all-new moves. With practice you can cancel into Crazy Rush mid-combo and then keep up the pressure without the opponent having time to block or recover.

Once in this mode, as mentioned previously any special move can be chained into one of the following moves four times before Balrog’s V-Trigger gauge depletes:

Balrog Dashes forwards with a powerful punch that sends him charging across the screen. The punch button used determines two things: how far the move travels across the screen, and how quickly Balrog recovers from it. The Heavy Punch version travels furthest but also takes the longest to recover, leaving Balrog open to counter-attacks. The Light Punch version is more of a close-range jab by comparison, but recovers so quickly that it’s difficult to punish even if the opponent blocks it. There’s a far-reaching and fast EX version, too.

Another hefty dash punch, this one sends Balrog flying forwards across the screen much as the Dash Straight does – except this one swings low, for the opponent’s legs. If it catches correctly it’ll trip them and drag them crashing to the ground. The button used determines the distance the move dashes and how long it takes to recover, making it essentially another version of the Dash Straight. There’s an EX version of this, too.

This punch starts low and swings high, and will miss opponents that are crouching. It’ll knock standing opponents down if it catches cleanly, however. As with Dash Straight the punch button used determines the distance the move travels, but the heavier used, the slower the move starts up. The Medium and especially Light punch versions can be used as anti-air attacks against jump-ins. Notably, the EX version of the move has armor, meaning it can absorb a hit while starting.

Balrog’s Turn Punch is an iconic fake-out move for the character. In Street Fighter 5 you activate it by pressing and holding any two punch and kick buttons together. When you release the buttons, Balrog performs a twirl and a nasty roundhouse punch. Hold this in then let it rip when the opponent lets their guard down.

The Gigaton Blow is Balrog’s infamous finishing punch, one gigantic, far-reaching impact. This can be done from across the screen, but it best used mid-combo, and better still while in Balrog’s V-Trigger. It’s an extremely damaging Super if you land it, so it’s important to try to combo into it.