Images of the two new operators coming to Rainbow Six Siege with the Black Ice DLC have leaked online. We already knew a new map and two new Canadian operators will be added, and thanks to today’s leak, we know a lot more about them. Reddit user Fireinyoyrhole grabbed images showing both of them, along with their respective default loadouts. The person says the images first appeared on 4Chan.

The operators are Frost, a female defence operator whose special ability is a trap to incapacitate enemies. The other is Buck, an attack operator with an ability called Skeleton Key, which adds an under-barrel shotgun attachment to his main weapon.

Speaking of weapons, each of them comes with two new ones. These are the C8-SFW assault rifle, the Super 90 shotgun, the 9mm C1 sub-machine gun, and the CAMRS marksman rifle.

Operation Black Ice content will be free to all, but non-season pass holders will have to spend in-game credits to unlock the new operators.

See everything that’s been dug up below: 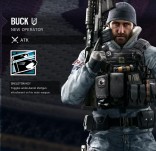 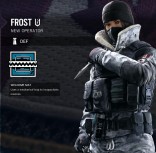