The various Autobots in Transformers: Devastation will each sport a different fighting style. Activision has revealed new details about how the different Autobots will play in Platinum Games’ Transformers: Devastation. In a new blog post, the publisher said Platinum has spent a lot of time trying to match each character’s fighting style with its distinct personalty.

This also extends to the moves and mechanics, allowing each of them to have their own set of moves and combos.

In addition, Activision has unveiled that anyone pre-ordering will receive a DLC bundle that comes with six digital pieces of content. That’s three character skins and three equipment pieces.

Watch the new gameplay trailer below for a look at some of the new moves. 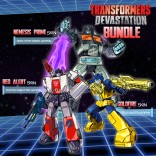