A batch of new Monster Hunter X screenshots have been released by Capcom showing off new monsters, environments and some Palico pals. The screens (courtesy of gematsu) introduce one of the four main monsters – Dinovaldo, a cuttin Wyvern – and the Ancient Forest area. Returning monsters include Zinogre, Tigrex, Rathalos, and Brachydios, while Felyne Palicoes will be back to assist you in dealing out ass-whoopings.

In an interview with Famitsu magazine, translated by siliconera, we also know that there won’t be any underwater areas in the game, and Frenzied monsters and Guild Quests will also be absent.

Monster Hunter X will feature Verna Village, which will be considerably more open than previous villages in the series and will be the only settlement with a Guild Hall for accessing multiplayer.

Monster Hunter X was announced last month for Japan. There is no word yet on a western release, so in the meantime, you can check out the gallery below. 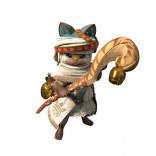