Directed by Straight Outta Compton director F. Gary Gray, the short follows the story of the Industrial Revolution in London, 1868 and the birth of organized crime.

You also get a look at Assassin’s Creed Syndicate protagonists Jacob Frye and his sister Evie.

In the game, players will experience a London going through turmoil as the Industrial Revolution takes over, with the former way of life quickly dissipating. Many residents couldn’t keep up with the changing times, which resulted in a glut of poor, destitute inhabitants. Many turned to a life of crime in order to make ends meet. The rich grew richer, the poor became poorer, and the population boomed forcing many in the city to live in over-crowded, squalid homes. Disease also boomed.

Enter twins Jacbo, Evie and their gang The Rooks, determined to take back London and bring down the Templars.

Jacob and Evie use multi-kill finishers and they are faster than previous assassins and use a more brutal combat style. The assassins also have new weapons such as the Assassin Gauntlet, and players will be able to switch between the siblings in the open world, with each having their own main story missions.

While having two playable characters will provide more storytelling options for the era, Ubisoft has yet to say whether modern day gameplay will be incorporated. It has promised to reveal more about the game “soon.”

The screenshots are posted below along with some artwork. Other screenshot galleries for the game can be found here and here.

PlayStation 4 owners will be handed exclusive Assassin’s Creed Syndicate content upon release. Titled The Dreadful Crimes, the content comes with 10 side missions where Jacob and Evie can investigate murders, kidnappings, and other crimes throughout London.

Assassin’s Creed: Syndicate will hit PC, Xbox One and PS4 on October 23. 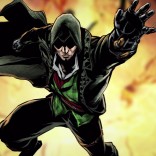