“A fiery tempered Bright Wizard, always in search of a greater challenge, and a long time addict to the flames of magic,” Fatshark wrote in a blog post introducing the character.

Sienna is described as wickedly humorous and dependent on the adrenaline rush of pyromancy (I can dig it). She arrives in Ubersreik as a prisoner, but the Skaven outbreak occurs before her trial.

Fatshark said it always knew it had to include a mage character and was very strongly attracted to the Bright Wizards for their tempers and “pyromaniac tendencies”.

“We automatically pictured this temperamental individual as an elderly woman,” the developer said.

“Not only were we avoiding the classical silver bearded wizard but the thought of having one of the most complex and powerful members of our group of heroes be a lady with a wicked sense of humor just felt like a perfect fit.”

Nice. The rest of the blog goes further into Sienna’s backstory, design aesthetic and gameplay, and you can find more details on the Bright Wizard including her arsenal of weapons on her Vermintide character hub page. 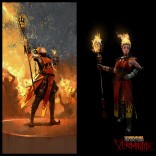