Unfortunately I only have so much upstream bandwidth, so I not only shrunk ’em down, I then compressed the heck out of them. They are ruined forever. I’m not even sorry.

Fight for survival while exploring the vast expanses of an unknown planet where anything you see is reachable in your weaponized mech, called a Skell. Custom- ize a lethal skill set of combat and defensive skills, called Arts, to strengthen your strategies and defeat enemies efficiently. Attack your enemies from multiple directions using melee weapons, guns, and your greatest asset—your tactical mind. 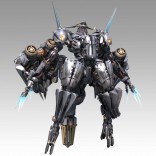