Star Fox Zero is coming to a Wii U near you, and bringing all your old friends with you.

Here are the Star Fox Zero assets we received after Nintendo’s E3 2015 conference. You could print them out and make a flip book, or you could just go watch the Star Fox Zero gameplay footage debut. It’s out exclusively for Wii U in the holiday season.

Screens; factsheet; artwork. You know the drill by now.

Fox, Falco, Peppy and Slippy save the Lylat system in this new deep space dogfighting adventure. Using the Wii U GamePad controller and the TV together creates a unique interface that allows players to experience the game with two different viewpoints within the Arwing – aim and shoot enemies in one direction while flying in another. This frees up the TV for a more cinematic flight experi- ence. Then, pilot the Arwing with its new Walker transformation, along with the new Gyrowing and the Landmaster Tank, to traverse interplanetary terrain. 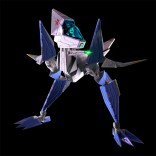