An innocuous page on the Xbox Support Website has spilled the beans on a new controller coming this June. Eurogamer spotted the leak in the Get to know your Xbox One Wireless Controller section of the site that references a 3.5mm port for headphones “Only available on controllers released after June 2015.”

Presumably this means that the controller will appear during E3, and as Eurogamer points out, a USB charging cable is something that has been frequently requested from Xbox One owners. 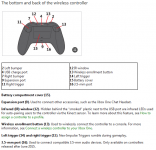