A level increase is coming to Hyrule Warriors along with the next round of DLC, the Ganon Pack.

According to Games Talk (thanks Gematsu), the DLC will arroive on the eShop in Japan February 26. It will likely land in the west not long after.

It contains two new challenge modes, and in one you get to play the beast Ganon.

As far as update 1.6.0 is concerned, the max level will be raised and new mixture potions will be added. Challenges mode has been expanded, new medals can be earned, score recording will be available, challenge scenarios have been added and a bug that extended loads times when entering battle has been squashed. 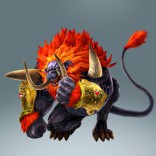