Online co-op details and images for Bayonetta 2 have been posted by Famitsu. According to the article, translated by Siliconera (via NeoGAF) the cop-op mode, Tag Climax, will allow players to team up with friends, other online folks or AI.

Various challenge options will be available, such as boss battles and enemy hordes. Players will also be able to pick the time of the stage.

More information on quick matches were discussed, such as the Verse Cards stage. Players will bet against other players using the in-game currency, Halos. The winner of the bet is the one who scores the highest points which can be used to purchase weapon variations, fighting techniques and more.

There’s more information on this posted through the link.

Famitsu also posted new character art and in-game co-op shots. You can view those below in hi-rez via AGB or over on 4gamer.

Bayonetta 2 is coming to Wii U in October, along with a remastered edition of the first game. 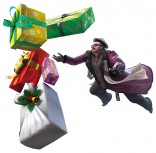