Skylanders Trap Team shakes up the toys-to-life formula a little by allowing players to bring characters into the real world, there to capture them. Using a new peripheral called the Traptanium Portal, players will be able to “pull characters out of the digital world into the physical world”, apparently.

“Portal Masters seek out and defeat the most wanted villains in all of Skylands, pulling them out of the game and into living rooms by capturing them in magical Traps,” Activision said in a press release announcing the game.

“Players can then send villains back into the game where they play as them to fight for good.”

You’ll even be able to hear the villains’ voices inside the elementally aligned traps, apparently. That’s the “trap” part of the title explained, then, but but once captured, these villains can then join with heroes in tag teams, explaining the “team” part also. Traps and Skylanders characters can be used in local co-op, allowing friends to pool their collections.

This all makes a little more sense in the video below.

In addition to the Trap Masters characters, there will of course be new Skylanders heroes.

The plot has big baddie Kaos once again working to rule the Skylands. Having captured the legendary Cloudcracker Prison and released all its prisoners, Kaos can only be foiled by Portal Masters.

Skylanders Trap Team pre-orders are open now ahead of its release on PlayStation 3, PS4, Wii, Wii U Xbox 360 and Xbox One on October 5 in North America and October 10 in Europe. A different game is in the works for 3DS. 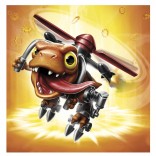