PS Vita Pets from Spiral House has its release date set for June 4. The game marries the pet and adventure game genres and includes talking puppies. The fluffy virtual critters will be able to convey their thoughts, feelings and needs and each dog had its own script of dialogue.

In total, there are 10,000 lines of spoken dialogue in the game and each pup as depth to their personalities which will unlock players become closer friends with them.

Players will train their pups to sniff out buried treasure, dig up clues and artefacts to help unravel the lost legend of a king and his dog, and solve challenges and puzzles.

Environments include caves, abandoned mines, an ancient maze and ultimately the center of Castlewood Island, where the king’s treasures are hidden.

“Through nurturing, training and playing together, your dog will gain the skills you both need to be able to progress deeper into the world,” said the firm’s Kevin Oxland. “Crawling, pulling, digging, jumping and more will all come into play if you want to be able to uncover all the secrets of Castlewood Island.

More updates are expected in the coming weeks. 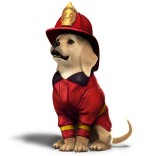