The Last of Us arrives on PlayStation 4 in northern summer, according to Internet translations of a comment from Sony Turkey. Thursday, Sony issued a statement denying the game was announced for PS4, and today, March 29, a Spanish retailer has posted the game online. Spanish retailer XtraLife has posted The Last of Us: Complete Edition on its website. Pre-orders come with with a green pack with the game’s logo on it. The site has it listed for a June 19 release. We’ll mail Sony again on the matter. Thanks, AGB. 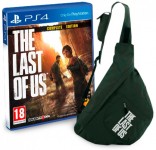 Sony has issued a statement to Eurogamer with a representative stating it has not announced The Last of Us for PS4.

“At no time have we announced that The Last of Us is coming to PS4 and therefore, have nothing to say on the subject,” said the firm.

According to NeoGAF and various other sources, PlayStation Turkey vice president Sercan Sulun confirmed the PS4 port of The Last of Us on Turkish television.

Sulun is said to have said that a sequel for The Last of Us is not on the cards “right now” before mentioning the port.

“I can say that first game will be released this summer for PS4 as a physical and digital copy, with enhanced graphics,” he reportedly added.

The port is expected in northern summer, again according to unofficial translations.

You can view the video here; the comment is said to occur at around 36 minutes.

Nobody on the VG247 crew speaks Turkish and the report has not been confirmed by Sony, so apply the usual amount of salt. It’s also worth noting that various PlayStation executives around the world have been chatty but incorrect in the past; PlayStation France is notorious for it.

Naughty Dog has been teasing something big for a while now. We’ve asked Sony for comment.