Wildstar will be released in June, NCSoft has confirmed after the date was announced bit too early yesterday. The MMO from Carbine Studios will launch worldwide on June 3, and as noted yesterday, pre-orders for the game will begin March 19 for £34.99 as well as through GAME and Amazon.

There are two additions being offered: the Standard and Deluxe Digital Editions.

Both editions come with 30 days of included playtime, three guest passes with seven days of playtime, and a housing décor item.

Those who pre-order either SKU will net the following bonuses:

Pre-order trailer and screenshots showing off some of the bonuses are below.

Wildtsar is currently in beta and has attracted more than 1.4 million signups. 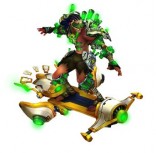