Gematsu reports the undated 3DS exclusive is set in Luxendarc several years after the Warriors of Light saved it from crisis.

There’s at least one new location – Istantarl, a city on the Nadarakes continent home to a university of magic founded at the suggestion of the Lakrika prime minister. Scholars here invented a new kind of magical practice.

New character Magnolia Arch was profiled, too. Calling herself the “Devil Buster who came from the moon”, Magnolia’s past is a bit mysterious – her age is unknown, and she tends to turn up unexpectedly. The Devil King suggests she’s the last surviving member of the moon nation. She’s known to have a reckless attitude.

“She is a sociable eccentric. Delicate, but largehearted. Realistically, a romanticist. An elegant beauty with elusive characteristics, only one thing is certain, she has fierce fighting skills and rescued Tiz Oria,” Square Enix said.

Bravely Second has not been dated or confirmed for release outside Japan.

Bravely Default: For the Sequel, an expanded re-release of the original Bravely Default: Flying Fairy designed to gauge and generate interest in a follow up, arrived in Europe and associated territories last week, ahead of a February launch in North America. 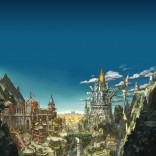