Persona 4: Dancing All Night publisher Atlus has released new screens for its PS Vita dance-em-up. There’s also a plot synopsis and some character bios. Check them out here.

Gematsu reports that the game is due on Sony’s handheld in the Japanese Fall, 2014.

The plot is set the summer after the Yasonaba case, and follows Rise, who has returned to the city to focus on her career as a dancing idol. It all gets a bit ‘The Ring’ however, as a strange website has been found circulating the public. It includes a video that, when watched, transports the viewer to “The Other Side.”

Naturally it happens to Rise, and she finds herself in the other plane, which she realises is actually called the “Mayonaka Stage.” There, she finds that a junior idol team called “Kanamin Kitchen” are being held prisoner, so Yu Narukami and pals form a team to investigate and save the day.

Yu Narukami is the protagonist assisting Rise, while a third character Kanami Mashita is one of the kidnapped junior idols.

The game will include over 30 tracks of new music and arranged Persona tunes. Confirmed songs are “Pursuing My True Self,” “Heaven,” “Reach Out to the Truth,” “Time to Make Nistory,” and “True Story.” Japanese musicians Tetsuya Komuro and Daisuke Asakura have teamed with Atlus to pen the score.

Here are the screens. What do you think? 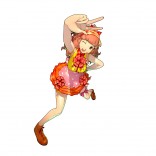