The title can be played over on Facebook now if you fancy a shot. It’ll hit iPad, iPhone, iPod Touch and a range of Android devices in due course.

In a press release sent to VG247 this morning, King confirmed that its portfolio of titles now logs over 1 billion daily plays, following news that the company has canned five of its games to focus efforts on its most popular releases.

Riccardo Zacconi, CEO and co-founder of King said in a statement, “Papa Pear Saga is different to any of our other games. It still possesses that core King puzzle quality, but it will be our first mobile Saga game to have a physics element which we think will translate very well to mobile and tablet game play.

“It’s also astonishing to see game plays grow to over 1 billion a day. This is a tenfold increase since our first Saga game launch on mobile this time last year.”

We’ll update once we have a solid mobile release date. In the meantime, here’s some screens: 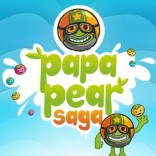