Nintendo has sent over a batch of screenshots for Pokemon X & Y, showing off the characters and Pokes which were detailed yesterday. There’s also a new gameplay trailer and more details. Have a look below.

Nintendo has also hashed out the details on yesterday’s CoroCoro Magazine information, which is below, and pulled straight from the PR:

And here’s more information on some of the the gym leaders and other people you will meet in the Kalos Region:

A new game feature called O-Powers will also be introduced which allows players the ability to easily power up Pokémon in their party and provides other benefits. The powers come in various forms and can be shared between players via the new Player Search System, or PSS.

Sharing O-Powers with someone you’ve connected with locally or through the Internet is accomplished by tapping a player on the Touch Screen. Some O-Powers will temporarily increase a Pokémon’s stats, while others make it easier to catch wild Pokémon or increase the Experience Points gained in battle.

There’s also Wonder Trade, which allows players to trade a Pokémon for one offered by someone else in the world. The catch is that players will make the trade without knowing which Pokémon they’ll get in return.

Pokémon X and Pokémon Y are out worldwide October 12 on 3DS. 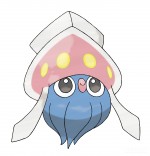