Final Fantasy 14: A Realm Reborn developer Square-Enix has gone detail-crazy, and has unleashed a long list of background on many of the MMO’s enemies, locations and Primals. Seriously, set aside a minute or two for this one.

Gematsu grabbed Square’s list, which you can find below. We’ve also got a batch of images and artwork at the foot of the page too. If you’re a fan of all things Final Fantasy 14, you should venture forth and get your fill.

Chimera: The origins of this nightmarish combination of lion, goat, and dragon have been furiously debated. Some deem the creature a cruel jest of the gods, while others believe it the twisted creation of forbidden sorcery.

Torama: These predatory quadrupeds are feared for their unrivaled savagery. In the same manner as its close cousin, the coeurl, the torama subdues its prey by unleashing electrical shocks from the two whip-like appendages that frame its fang-lined jaws.

Golem: Golems are magical constructs of clay or stone that have been imbued with temporary life. Ancient tomes claim that the creation of these beings is only possible when the laws of nature are weakened by the chaotic influence of an umbral calamity.

Dullahan: While commonly considered to be a variety of ancient golem, the exact nature of these hulking suits of animated armor is unknown. One theory suggests that they once clad men, and that the original wearer’s soul lingered on after death, doomed to spend the afterlife in a prison of steel.

Mandragonra: The enigmatic mandragora were first observed in the aftermath of the Seventh Umbral Era. It is not known whence they came, or if they even existed prior to the Calamity. There are those who insist that the diminutive seedkin are sentient, but further research is required to confirm such speculation.

Wyvern: The wyvern is a sinuous scalekin that cuts swiftly through the air on large, membranous wings. A less-imposing relative of dragons, wyverns often serve as frontline troops in the endless assault on the fortifications of Ishgard.

Ziz: The beautiful, vibrant coloration of this scalekin’s feathers are a natural indication of its venomous nature. Infamous for supplementing physical attacks with poisonous breaths, it is also capable of impressive bursts of speed, owing to its muscular legs and the purchase afforded by its sharp talons.

Cyclops: The Cyclopes dwell in the western parts of Abalathia’s Spine, and are immediately recognizable by the single eye that dominates their broad faces. Though thickly muscled and possessed of prodigious strength, these dim-witted creatures are often enslaved and used as shock troops by the more cunning beast tribes.

Ifrit: Ifrit, the incarnation of fire and fury, is worshipped by the lizard-like Amalj’aa tribe. Even amongst the primals, Ifrit is highly given to savagery, his temper quick to erupt in a conflagration of death. His breath ignites the very air, his claws melt the strongest steel, and his twisted horns scorch the heavens. Those who would face him must be prepared to withstand the fires of hell.

The Amalj’aa: The hulking Amalj’aa are a race of nomadic beastmen who inhabit the grasslands of Paglth’an, where they subsist by hunting the native wildlife. These worshippers of the primal Ifrit believe that the region of Thanalan has been purified by sacred flame. In their efforts to reclaim this holy land, Amalj’aa warriors have clashed time and again with the forces of the sultanate of Ul’dah.

Ramuh: Lightning given sage form, Ramuh is venerated by the sylphs. Though depicted in legend as a wise and benevolent elder who harbors ancient secrets, Ramuh is a merciless arbiter of those who would defile the sacred depths of the forest, striking down interlopers with fulminating bolts of lightning.

The Sylphs: A diminutive people who dwell deep within the Black Shroud, sylphs resemble delicate dolls wrapped in vibrant leaves. By and large, these woodland folk hold favorable relations with other races, and have become an almost common sight since a trade in crystals was established. The Garlean invasion of the Black Shroud, however, has quickly soured the sylphs’ view of outsiders.

Garuda: The queen of storms, Garuda is the chosen primal of the Ixal. Though elegant of form and graceful in motion, the capricious and ruthless nature of this bloodthirsty being engenders mindless terror even amongst her devoted worshippers. Her wrath often erupts without warning, and descends upon her victims with unbridled fury.

The Ixal: This aggressive mountain tribe claims the wind-blasted canyons of Xelphatol as their domain. Though their race has long since lost the capability for flight, the feathered beastmen are fervently proud of their vestigial wings. The Ixal stage frequent raids into the Black Shroud, and fell trees to offer in worship to their patron deity, the primal Garuda. Such behavior, however, leads to violent confrontations with the people of Gridania.

Titan: Titan is the indomitable will of the earth made manifest, beloved of the kobold clans. Compassionate and gentle, Titan is as a father to his tunnel-dwelling worshippers. But woe betide those fool enough to provoke this colossus─for when his anger is waked, the very earth trembles and heaves under the unstoppable fury of his mountainous bulk.

The Kobolds: The kobolds are a race of mole-like creatures who have excavated a warren of tunnels beneath O’Ghomoro, a mighty peak rising in northern Vylbrand. Believing the ores of the earth to be a gift of the primal Titan, these subterranean beastmen seek to divine their deity’s teachings through the arts of alchemy and metallurgy. Despite forging a peace agreement with Limsa Lominsa, recent conflicts over mineral deposits have led to a resurgence of hostilities.

Leviathan: Lord of all waters, revered by the ocean-dwelling Sahagin. Lurking in the lightless depths, Leviathan devours all that crosses his path. In ages past, seafaring folk believed that tidal waves were a sign of the great serpent’s wrath, and they sought to appease him with living sacrifices.

The Sahagin: This aquatic race of beastmen reside in a city built at the bottom of the Indigo Deep. Known for attacking ocean-faring ships and dragging sailors screaming into the murky depths, the Sahagin are often the subject of angry and fearful curses on the streets of Limsa Lominsa. Since the advent of the Seventh Umbral Era, these hostile denizens of the sea have taken to seizing territory along the Vylbrand coastline in order to establish new spawning grounds.

Bahamut: Held in duress for aeons within the lesser moon, Dalamud, the elder primal Bahamut broke free of his captivity when the celestial body was wrested from the heavens to descend upon the Battle of Carteneau.

Once freed, the terrible being wrought fiery destruction across the length and breadth of Eorzea, his devastating rampage marking the beginning the Seventh Umbral Era. In the midst of the chaos, however, Bahamut was enveloped in a blinding white light and abruptly disappeared from the skies. None claim to have seen the primal in the five years since.

Odin: A fell knight clad all in black, Odin roams paths long forgotten beneath the canopy of the Black Shroud. There are none now alive who know the truth of when or by whom this elder primal was first summoned into the world. Ever vigilant as he sits astride his mighty steed, Sleipnir, it is said that Odin is drivenly solely by the desire to do battle with worthy foes.

Limas Lominsa: On the southern coast of the island of Vylbrand, under the shadow of ancient cliffs worn by the relentless onslaught of the Rhotano Sea, lies the marine city-state of Limsa Lominsa.

Said to be blessed by the goddess of navigation, Llymlaen, the city is spread out over countless tiny islands, each connected by sturdy bridges of iron and wood construction, earning her the name the “Navigator’s Veil” from traveling bards who have witnessed the city’s beauty from afar.

Limsa Lominsa is a traditional thalassocracy, with power lying in the hands of the ruling party and its leader, the Admiral. Its economy is driven by shipbuilding, fishing, and blacksmithing, but the majority of wealth comes from the lucrative shipping industry.

To maintain the safety of its maritime routes, the city employs a formidable navy known as the Knights of the Barracuda. However, even in the waters nearby the city, pirate bands run rampant, reaving and pillaging.

Ul’dah: The bustling commercial hub of Ul’dah sits amid the desolate desert landscape of southern Aldenard. The city is organized strategically around the dome-shaped citadel at its center. Its towering fortifications and protective outer walls are visible for malms in all directions, and serve as a stark deterrent to would-be besiegers.

Visitors from every corner of Eorzea come to Ul’dah to partake of the city’s famed recreation, most notably the fighting arenas and gambling halls. Ul’dahn culture is known for its affluence, and the wealth of the nation comes in large part from its abundant mineral resources and prestigious clothcrafting industry.

Historically, it is the sultan who claims sovereignty over Ul’dah, but true power is wielded by the Syndicate, an elite group of six of the most influential and richest members of society. Nald’thal is the patron deity of the city, and two great halls devoted to his two aspects can be found in the eastern and western sections of the city.

Gridania: In the eastern reaches of the Aldenard landmass, home to vast, dense woodlands and coursing rivers, lies the forest nation of Gridania. The cityscape is a mosaic of labyrinthine waterways and great wooden structures, so gracefully constructed they seem a part of the surrounding environment.

The Gridanian emphasis on natural harmony has led to its preeminence among Eorzea’s city-states in trades such as forestry, agriculture, carpentry, and leatherworking. Gridania is also home to the Wood Wailers, a militant band of polearm-wielding sentries charged with the protection of their homeland.

The favored goddess of the citizenry is Nophica, the Matron, but great faith is also placed in the wisdom of the Seedseers—young oracles who guide the nation based on the will of the forest’s elementals.

Phew. Told you there was a lot. Here are the images: 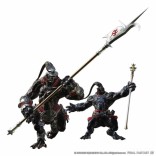 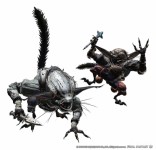