A One Piece: Pirate Warriors 2: Collector Edition has been announced for Europe. It comes with an exclusive 14cm figurine of Luffy created by the sculptor Keiji Iwakura. Also, if you pre-order it or the standard edition, you’ll net exclusive bonuses “to be revealed later on.” Check out a shot of the figurine below. One Piece: Pirate Warriors 2 is out exclusively on PS3 in August. 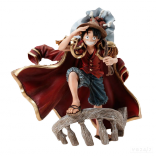