Too Human developer Silicon Knights was developing a string of intriguing games before it ran into trouble. Get the list and a collection of concept art from canned games below.

NeoGAF member Mama Robotnik has researched Silicon Knights thoroughly using information already out there in the public domain and has acquired a list of cancelled projects at the studio, as well as a batch of concept art for games such as Eternal Darkness 2 and Too Human: Rise of the Giants.

Mama Robotnik writes, “Silicon Knights are close to dead, if not dead already. They owe Epic millions of dollars, and are legally obligated to destroy all of their unsold games and source code. They reportedly have five employees, maybe even less – even the company IT Manager and Chief Operating Officer are gone.

“They have ascended from a small indie Amiga developer, to a champion of cinematic games. They have transitioned from being a close ally of Nintendo’s most senior leadership, to being associated with a string of sub-par and cancelled games.

“They have gone from Eternal Darkness – developed with input from Shigeru Miyamoto himself – to secretly funnelling staff from a doomed game to desperately assemble a prototype for Eternal Darkness II.”

Here is a list of unearthed Silicon Knights projects that have been cancelled:

The Pillars of Nosgoth was said to have been conceptualised by Silicon Knights’ Dennis Dyack in collaboration with Crystal Dynamics, but for whatever reason the latter assumed control over development. However, Mama Robotnik’s thread is peppered with early concept art of Kain and other characters that made the final cut.

“With Blood Omen, Silicon Knights began and ended their relationship with Crystal Dynamics – a one-game collaboration that would result in a critically-acclaimed product, a successful IP with a devoted following, and a bitter feud between the studios that was never fully understood to outside parties. Both sides have refused to discuss what exactly happened.”

Eternal Darkness 2 is another game often requested by gamers, and as it happens, it did enter the prototype stage at Silicon Knights during development of the critically-panned X-Men: Destiny.

Mama Robotnik cites a Kotaku report in which Silicon Knights sources state that X-Men: Destiny was just seen a job for Dyack to get through before working on Eternal Darkness 2 fully. Sources claim that a demo was completed but never revealed.

We’ve got a full gallery of the concept art below, but if you are interested in the unseen backstory behind Silicon Knight’s demise, I suggested you check out the NeoGAF report. it’s properly fascinating stuff, and too big to cram in here.

There is also an interesting section about the second Too Human game, Too Human: Rise of the Giants, along with this piece of concept art:

It was said to be a game about revenge, according to Dyack. The company has recently been legally ordered to recall and destroy all unsold copies of its Unreal Engine 3 titles, following a long and bitter law suit with Epic Games. Find out what happened here.

Finally here are some piece of concept art from Silent Hill: The Box – a project that has been called ‘convoluted’ by sources in the NeoGAF report: 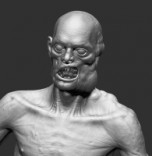