InJustice: Gods Among Us will contain a playable Green Arrow, according to yesterday’s announcement, and today, we’ve got some new screens of the man in green for you below along with the game’s box art.

Also, Ed Boon is teasing the inclusion of The Joker on Twitter, but you can see the fella for yourself on the game sleeves.

We won’t fault the man for using the Steve Miller song as long as he promises not to do it again.

Shots of The Joker are to be released sometime soon, he tweeted. 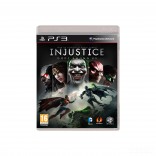