Heavenly Sword 2 concept art has leaked online, showing off Nariko in all her ass-kicking glory.

All Games Beta has published concept art for what it believes to be Heavenly Sword 2 concept art. It’s not clear if this art was intended for a PS3 sequel or something currently for next-gen.

Siliconera reports that Heavenly Sword 2 was in development at Sony Cambridge and was shelved.

The game saw Nariko fighting the Raven King and his gang. She was also accompanied by two bumbling twins who were chained together. You can see the duo in the pics below.

The shots also show Nariko back in action, as well as enemy troops and a number of NPCs. we’ve asked Ninja Theory for comment.

UPDATE: Ninja Theory’s Dominic Matthews has told VG247 that the shots are “not Ninja Theory art. Sony own the Heavenly Sword IP, whether or not they dabbled with new concepts independently of us is not something I can comment on.” 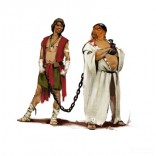