Summer’s coming, for those of you in the northern climes, and that means Madden NFL 13 is on its way. Check out a Playbook trailer on the latest entry’s updated feature set, and admire about a zillion new screens.

The teeny-tiny screens seem to have been capped directly from the trailer below, so don’t blow a gasket over their low resolution. Better things are on the way, no doubt. Madden NFL 13 is due on PlayStation 3, Vita, Wii, Wii U and Xbox 360, probably in late August. 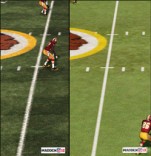