Pro Evolution Soccer 2013 will return to its roots, Konami has promised this morning, as it officially unveiled this year’s installment following a small tease last week.

Pro Evolution 2013 will release this autumn, Konami confirmed this morning, in what its calling a return to the series’s roots.

It’ll launch on PS3, Xbox 360, Nintendo Wii, PC, PlayStation 2, PSP and 3DS. A bit surprisingly, there is no Vita version.

“This is an exciting time to be part of the PES community, and PES 2013 marks a new level of playability with the return to our key ethos of utter control and freedom,” said European Team PES leader Jon Murphy.

“Football is all about making magic happen with skill and precision, and PES 2013 truly encapsulates this. Fresh faces within the development team and some very exciting ideas will breathe new life into the PES series, and we look forward to showing what we can do in the coming months.”

Pro Evolution Soccer 2013 will introduce total freedom of control over the ball, dynamic first-touch and full manual passing and shooting. The speed of dribbling has also been reduced, while active one-two passes can be made. Response defending will see players attempt to slow an offensive attack with the help of the R2+X buttons.

Goalkeepers will also be much different in PES 2013. Keepers will have more control, as well as enable a more precise distribution.

A new AI system will also be introduced known as ProActive AI, uniting both control and realism for the series. Another introduction is PlayerID, which will focus on individual elements of a player, both outfield and between the sticks.

Konami’s released an extended version of the teaser trailer posted last week featuring Real Madrid’s Cristiano Ronaldo, featuring a mix of both live-action and gameplay footage. Get it and the game’s first shots below. 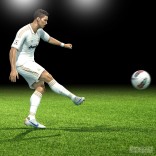