Stace Harman talks to Dark Souls producer Hidetaka Miyazaki in Las Vegas on balancing the giddy highs with the hellish lows of porting the hard-as-nails RPG to PC. New screens and art.

Namco Bandai estimates that Dark Souls’ 1.3m players have collectively experienced some 260m deaths since the game’s console launch; an average of around 200 deaths per player.

Regardless of sales figures, a port of the original Demon’s Souls is unlikely as the publishing licence is held by Sony.

Dark Souls Prepare to Die edition will receive a retail and digital release on August 24 worldwide.

Dark Souls Easter Egg: Despite speculation concerning hidden uses of the pendant item in Dark Souls Miyazaki remains tight-lipped. Speaking via his translator he comments that whether or not it has any undiscovered uses should be kept secret and that he “wouldn’t answer that question for his life”

Are PC gamers masochistic? Certainly, enough of them wish to experience the exquisite pain visited on their console brethren by From Software, that an online petition to bring Dark Souls to PC has elicited over 92,000 signatures since its inception in January. Now, three months later, the petitioners have been rewarded by Namco Bandai announcing that it will grant their sadistic wish and so the brilliantly realised RPG will launch on PC on August 24.

It’s an announcement that, on closer inspection, is bittersweet and speaking to From Software producer, Hidetaka Miyazaki, at the recent Namco Bandai Global Gamer’s Day in Las Vegas there’s a sense of excitement tinged with apprehension; fitting perhaps, as it’s a mix of feelings that the game itself so often provokes.

On the one hand, Dark Souls Prepare to Die edition will feature additional content – more on that later – but elsewhere the game will very much be a straight port of the console version, with little work done to optimise it for the PC environment. Are From Software and Namco Bandai simply giving fans what they’ve asked for, or do they risk losing the good will and vocal support that Dark Souls and its predecessor have fought so hard to garner?

First up, support for a keyboard and mouse will be included but minimal, with Miyazaki recommending use of a game pad and confirming that the menu and inventory screens will remain unaltered. Graphic options will be similarly sparse, which Miyazaki attributes to Namco Bandai requesting that the game be a “straight port”; this may even rule out optimisation in areas such as Blighttown and New Londo Ruins where the developer’s technical achievements on console were not able to quite match that of their artistic vision, resulting in frame-rate issues.

Sadly, a PC port also brings with it the inevitable rise in the threat of piracy. With seemingly little being done to deliver a PC version that takes full advantage of the host platform’s strengths, the threat of piracy will not be combated by enticing potential pirates to pay to receive added value extras and so Namco Bandai will have to instead rely on DRM measures.

In this area, it’s looking very likely that it will be Games for Windows Live that will provide a measure of security, although a Namco Bandai spokesperson insists that this is “still to be decided”. Yet another petition that has cropped up online since GFWL support was announced last week, with petitioners lobbying for the use of Valve’s Steamworks, rather than GFWL.

However, ahead of the console release last year, From Software deployed high-level hunters into the game world to deter those who had obtained official copies ahead of its Japanese launch; perhaps a similar method could be used to combat piracy?

“I hadn’t thought of using that means to fight piracy,” Miyazaki ponders, before going on to highlight a potential problem with the approach. “I have a concern that if we use creative ideas to fight piracy that may actually accelerate the volume of piracy and we need to prevent that situation.”

Light at the end of the tunnel

Moving away from the negative connotations attached to the words “straight port” and the increased level of piracy to be dealt with by the PC version of Dark Souls, there is hope to be found in the potential features that may result from Dark Souls coming to a more open platform.

“Personally, I am interested in the concept of mods,” Miyazaki told assembled journalists. “However, due to the lack of experience of creating PC games, both as a director and a company, we need more time to adapt to what PC gamers would want with regard to mods, so at this time we’re not announcing anything.

The implementation of a framework that allows mods would have to be carefully considered, so as not to push the game from compellingly difficult to outright unfair, but if Miyazaki is interested in the concept there is at least the possibility of support further down the line.

Any further developments for Dark Souls Prepare to Die edition will likely be heavily influenced by sales performance, with Namco Bandai acknowledging that Dark Souls is something of a test case for them to gauge interest in the IP which, outside of the petition that supposedly facilitated this launch, remains unknown.

Fortunately, a few, more tangible, facts surface concerning the new content that will be included in this release, all of which has been designed since the game’s console launch last year. A new chapter, set some time after players have battled through Sen’s Fortress, will support new story elements set in the kingdom of Lodran.

Three or four new bosses will make an appearance, including the Dark Knight Artorias, along with some new NPCs, enemies, equipment and a new PvP matchmaking system, as detailed on the game’s website, though there won’t be any new covenants. Miyazaki is reticent to specify the exact form that these new bosses will take and further announcements concerning the new content will be made in the coming months, with E3 likely to yield the majority of the details ahead of the August 24 release date.

At this point, console gamers will be clearing their throats in readiness to ask the inevitable question “what about us?”. Last year, Dark Souls DLC was rumoured, but whether this new content will be available for consoles either as downloadable content or perhaps as a part of a separate Prepare to Die edition standalone release is currently unconfirmed at this stage.

“It’s completely understandable that people bought the original would have questions surrounding [the additional content]”, Miyazaki acknowledges when questioned. “However, as a director I cannot answer that right now – but I want to emphasise my apologies that we don’t have any news for [console gamers] at this point.”

It seems highly unlikely that the extra content and assets would be designed specifically for the PC version and not released in some form on console but, despite some rumours that circulate during Namco Bandai’s event, this remains unconfirmed.

Overall, the announcement of Dark Souls: Prepare to Die edition is tinged with trepidation and speculative whispers that leave both PC and console gamers unable to wholly embrace what should have otherwise been triumphant news. The manner of the announcement may have proved unsatisfying, but the fact remains that PC gamers who have yearned for Dark Souls since its console release are soon to have their dreams and nightmares come true; I can only hope that they’re happy with the result and not made to rue what they wished for. 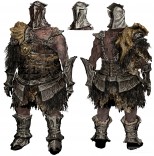