The sexism in games debate has finally gone mainstream, but can it ever be a winnable battle? Yes it can, says Patrick Garratt, and we’re all responsible for aiming for victory.

The truth is that games are sexist in their depiction of women to a depressing degree. I raised the point on a press trip dinner last year: how many female characters can you think of that aren’t obviously designed to be sexually attractive to men? Apart from Shepard, no one around the table could suggest a single one.

GDC 2012 was a one-story show. David Cage’s Kara demo encapsulated the disastrous situation we currently face with female characters in games by reducing its protagonist, a female robot, to an absolute sexist stereotype. She can “look after your house, do the cooking, mind the kids,” and is “entirely at your disposal as a sexual partner.” Her voice is demure. She has a pout and wide blue eyes, blemishless breasts and peachy buttocks. As her skin forms she covers her nipples and genitals and her male creator pronounces her, “Ready for work, honey.” Confused, she questions what’s about to happen. He goes on to call her “baby” before starting to disassemble her for becoming cognisant.

Kara’s life is under threat because she admits to thinking, an unacceptable trait if she’s to fulfil the perceived normality of her role as a female. The man putting her together and the society she’s about to enter are sexist if they’re beholden to our own. The timing of Cage’s piece is hardly accidental.

Evidently, video gaming has a substantial problem with women. The subject of how females are portrayed in games has hardened recently, with a new breed of mainstream feminist games writer – the two that most easily spring to mind are Keza MacDonald and Brenna Hillier – having thrown their weight behind the insistence that sexism in both games and gamer culture shouldn’t be ignored.

Instances of blatant and insidious sexism in games aren’t difficult to spot. A stunning example of community-based sexism arose in February, when competitive fighting game player Aris Bakhtanians was lynched by the games journalism community for sexually harassing Miranda Pakozdi on a live stream for Capcom’s Cross Assault show. Capcom did nothing to stop it, and was forced to apologise after Bakhtanians claimed aggressive sexism is an integral part of the fighter community.

Less obvious examples of how women are belittled in games content itself are typified by BioWare’s recent decision to leave specifics of FemShep’s first public marketing appearance to the perennially erect. The female version of the Mass Effect hero has existed in all the series’s instalments, but EA only decided to use her image publicly for the first time on the special edition of Mass Effect 3. The default FemShep was a stern, non-sexualised woman, and became a poster-girl to the feminist and LGBT gaming community as a result. BioWare provoked fury, however, by allowing the public to vote on the image to the used on the box; it wasn’t difficult to argue the studio was asking its hugely male-oriented audience, “Which one of these would you most like to have sex with?” For some, the failure to stand behind the “real” FemShep in the public eye was a crippling disappointment.

It was a shame – BioWare has done much to destigmatise same-sex relationships in games by including them in its RPGs, and has become something of a bastion of inclusiveness in the industry – but the truth is that games are sexist in their depiction of women to a depressing degree. Having Brenna on staff has been revelatory in terms of forcing me to consider the issue. I raised the point on a press trip dinner last year: how many female characters can you think of that aren’t obviously designed to be sexually attractive to men? Apart from Shepard, no one around the table could suggest a single one. Moreover, how many are designed with ludicrous armour and impossible breasts (look in the gallery below if you’re struggling, although I doubt you’ll have much trouble)? Or look like blow-up dolls? Or serve to be nothing more than a love interest?

David Cage’s Kara demo attacked the issue of
sexism by reducing its lead to an impeccable
sexist stereotype.

Even Ken Levine was forced to defend himself on the issue with Elizabeth’s character in BioShock Infinite recently, saying he’d “barely thought about” the fact she’s a pretty young women with an overflowing bosom. If you say so, Ken.

It’s easy to be angered by gaming’s ludicrous depiction of women, but let’s not kid ourselves. The situation in games is hardly unique. Issues surrounding the treatment of women in the media are widespread, and aren’t limited to fiction. UK freelancer Sarah Ditum clashed with author Gail Dines on New Left Project recently over Dines’ book Pornland, which argues a pro-banning stance towards pornography. In this follow-up piece on her blog, Ditum explained incredulously that Dines, who describes herself as a “radical feminist,” refused to even define what pornography actually is. If definitions elude those leading the charge against what they see as the evil of porn – unarguably the definitive example of a medium sexually objectifying women – surely it’s true that gaming’s age-old, mainstream brand of comic book sexism will be impossible to root out?

Is gaming’s fledgling anti-sexism movement a lost cause?

Before we go blundering into any answers, we need to avoid “doing a Dines” and define what we mean by “sexism”.

According to this, sexism is:

Hopefully it’s immediately obvious that games aren’t just sexist towards women: they’re generally just sexist. Men in games – we’re talking about core games here – are invariably rendered as muscular and violent. Men tend to not be unduly offended by these images, as they describe males as powerful, physically dominant and heroic. While some may find this flattering and an exercise in fantasy fulfilment, it doesn’t mean these depictions aren’t sexist.

Unfortunately, female characters in games can play on “traditional stereotypes” in that the comic-style accentuation is placed on sexual attributes and casting the woman primarily as a sexual entity. It’s easier to see why this is going to be offensive to women. Think about it: is there even a single “sexy” male character in games?

When we’re discussing sexism in games, we’re usually talking about women being displayed as either sex objects or in traditional, supporting, submissive or “frail” roles. Goats are normally got over things like Ivy’s chest in SoulCalibur, Dead or Alive’s jiggling or Bayonetta’s behind. Princess Peach always needs to be rescued, remember.

The phenomenon’s reversible. A typical example for women is “chick lit” and “chick flicks”. Excessive consumption of this style of fiction can be damaging in that it may leave women with unrealistic expectations of men and loving relationships.

Damage related to media-based sexism isn’t age-blind, either. Children are bombarded with images of sexual stereotypes from year dot. Any parent will know exactly what I’m talking about. Trying to protect a young daughter from the “truth” that women are princesses and live in pink castles can be a heart-breaking exercise in futility. Well-meaning relatives buy Disney Princess for girls and toy JCBs for boys. There’s virtually nothing you can do about it.

But we can do something about sexism in video games. Sexist themes in games could, in theory, lead both men and women to gestate a skewed perception of the female sex. And that’s not acceptable.

While I’m not about to stop reporting on games in which women are depicted sexually – I can’t: I’d have no business – we don’t have to encourage it. If you’re a media-owner or journalist, just think about what you’re doing. When you’re selecting an image to use at the head of a feature, don’t pick the one with the over-sized breasts. Similarly, maybe you should stop flagging up images of cosplayers for the sake of brandishing a photograph of an attractive woman in a pair of knickers on your homepage.

When you’re cropping images for your pieces, don’t put the one-third point – this is the natural interest area in any image – on a female character’s chest or backside. By doing that you’re displaying the character as a sexual object, intentionally or otherwise. You don’t have to. It’s better to hit the eyes.

Try to pick an image in which the women is doing something, as opposed to standing still in a submissive pose. Try to avoid images of female characters arranged in their pants. Yes, Catherine, we’re looking at you (or not, as the case may be). Ask yourself this: does this image mean, “Ejaculate here, please”? Then don’t use it.

The same goes for your buying habits. If you’re not comfortable with the way a game portrays women, you don’t have to buy it. Be active. If you don’t like it, don’t be a part of it.

And as for content creators, it’s time to at least assess the possibility that 1970s attitudes towards female stereotypes are as out of date as Jesus. Maybe there’s room for core games in which non-sexualised women are as powerful and pro-active as men. Imagine that.

Kara eventually saves her own life by admitting to being scared. We should all be trying to create an environment where she doesn’t have to be. I’m not suggesting cropping an image in a certain way is going to stomp out sexism in games overnight, but let’s at least start somewhere. 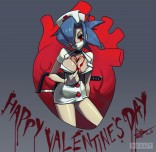