Square Enix has announced it’s to release Thearhythm Final Fantasy in the US and Europe this summer. The rhythm RPG, featuring some of the best tracks from past and present OSTs from the series, released in Japan last month on 3DS, but was never confirmed for a western release until now.

The launch also comes ahead of the series’s 25th anniversary this summer. Assets are below. 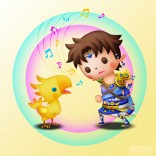