Activision has released a large set of assets for Prototype 2 which provide a look at some of the enemies players will come into contact with in the game. Along with the screenshots and renders, are descriptions of the Infected, Juggernaught, Hydras, Brawlers, and the newest menace in the series, Flyers. Head on below the break to become acquainted with the horrid, mutated denizens of NYZ. There’s also a new video for the game below, courtesy of GiantBomb, and it’s an foreboding intro video called “Daddy’s Coming Home”.

The standard Blacklight entity is the Infected — standard human-sized and (generally) human-shaped walking dead that wander the streets mindlessly and seek to devour flesh and organs. A Blacklight outbreak appears to create hordes of these creatures; in reality, they represent less than 1% of all victims of the virus.

Infected are created when a Blacklight infection does not kill a victim but also fails to activate any notable dormant DNA in the victim. The victim will awaken from unconsciousness, display the intelligence of an animal, and seek purely to kill and consume living (and dead) organisms.

Infected retain a humanoid appearance but manifest various tumors and other viral growths that tear through clothing and greatly alter their silhouette. They have average speed, enhanced strength, and can be killed the same way as a regular human.

Despite having once been mere infected humans, these beasts are as large as a van and just about as hard to destroy. Juggernauts are the tanks of the Blacklight legions — slow moving, powerful, and armoured. They possess huge, heavy fists and are capable of deflecting almost every attack.

Like Brawlers, it is likely that Juggernauts are born from a pustule. If so, no pustules large enough have ever been observed.

Juggernauts are usually grey-skinned, belying their rock-like flesh. When properly angled, their flesh deflect rockets and other powerful, high-speed attacks. Their primary attack method is simple: they smash their hammer-like fists on the enemy. Some variants of the Juggernaut have been shown to agitate the biomass running beneath the city, summoning a wave of spikes from the ground.

It is not known where Hydras come from. It is possible that, since the biomass trunks also erupt from the underground, Hydras may simply be animal-like appendages that extend or “bud” from the biomass itself (no biomass trunk has yet shown this kind of behaviour or any kind of intelligence, even animal-like).

Hydras are pink- and red-glowing tapered worms. They are usually six feet wide at the base, where they erupt from the ground. Their mouths are topped with two bone-like mandibles that form a long pointed scoop. These mandibles can separate to reveal a mouth that spits out a tongue. This tongue can grab enemies and bring them closer for a titanic slap from the tentacle itself or, presumably, to be devoured.

Flyers are a brand new phenomenon that have begun to appear in the skies over NYZ since the beginning of the second outbreak. Flyers are vulture-like monsters that spread the plague and attack anything that stands — or flies — in the open.

The origin of the Flyers has not been uncovered. Other than the Hydra, they are the only Blacklight monster that does not have a humanoid physiology. It’s possible that Flyers are city birds (pigeons, crows, starlings) that have been infected and mutated by the virus.

Flyers look like diseased vultures. They have pinkish flesh, scraggly feathers, and gnarled faces. Their wingspan is approximately two meters and they have bulk sufficient to knock a helicopter out of the sky. Their favorite attack method is to perform a high-speed dive-bomb. They mass in flocks.

Brawlers are infected monsters that are as large as a grizzly bear and just as savage. Like Infected, they seek to devour flesh — but Brawlers are much more predatory, intelligent, and dangerous. They run on all fours, leap several stories high, possess incredible strength and fortitude, and sport a pair of razor-sharp, foot-long claws.

Brawlers are born from Blacklight pustules: man-sized biomass wombs. A Brawler may merely be a base-level Infected that has entered a cocoon state, surrounded itself with a pustule, and then transformed into a Brawler (this has not been proven). Whatever the truth of it, it’s clear that Brawlers are born fully-formed, enraged, and ready to fight.

Of all the monsters, Brawlers are the fastest and most savage. They can easily keep up with a vehicle and just as easily topple it with a shoulder-check. Their flesh is pinkish, hairless, and glows with Blacklight-infused muscle fiber. They are incredibly strong and can sustain large amounts of damage before dying. Otherwise, they are simply very large humanoids that move on all fours. 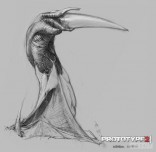