There are over 500 abilities to choose from in The Secret World. Funcom’s Decks provide guidance towards strong builds for those a little overwhelmed by freeform progression – check out the Witch Hunter, Warlord, and Thaumaturgist.

Players can choose to kit out their character with any of the thousands of combinations available, but a Deck has a couple of neat bonuses. Each collection of seven active and seven passive abilities has been grouped together for their synergy, and by assembling the whole Deck you net a special outfit marking you as belonging to that quasi-class.

Lead designer Martin Bruusgaard told GamesRadar the Decks will give new players something to work towards without restricting those who want to experiment.

“Some of the beauty of the system is allowing the players to come up with cool stuff themselves. We want to reward the players who dive into this and take their time to tinker with this, and there are lots of cool combinations we will save for these players,” he said.

There are ten decks for each secret society, although only three have been revealed so far. The Witch Hunter is a Templar Deck, which focuses on critical hits and spike damage using pistols and hammers. The Warlord is a Dragon deck which uses blades to deal with large groups of enemies. The Thaumaturgist is an Illuminati gunmage Deck which uses a shotgun and elemental magic. More details are available on MMORPG.com.

The Secret World is currently in closed beta; general release is expected in April. 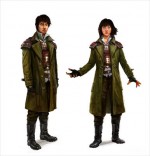