A character render, shots and what appear to be a couple screengrabs for Resident Evil 6 have popped up online, and we’ve posted the lot for you below, courtesy of Andriasang. The show Leon, Chris and the rest as well as an the infected president of the US, and some enemies you will need to shoot in the face. The game was revealed last night, and is will land on PS3, and Xbox 360 in November. 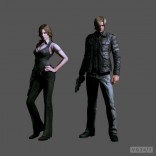