Having introduced the Dragon and the Templars, Funcom would like to present the third faction in The Secret World – the powerful and power-hungry Illuminati.

A handful of new artworks have ben released today, with more to come over the week, including – with any luck – a new trailer. The official blurb for the final faction follows:

“The Illuminati are invisible puppet-masters and corporate manipulators, and they crave power and wealth by any means necessary. They may have ancient roots, but they remain forever young and hungry. The Illuminati’s golden agents enjoy power, money and glamour – but the real power they offer you goes beyond that: Information worked from every civilian, government and clandestine organization in the world.”

Sounds dreamy – but remember, VG247 faithful join the Templars. You hear me, Johnny?

In other Secret World news, lead programmer Øystein Eftevaag told The Hydra Initiative that the game’s shared engine isn’t a problem for the developers, instead something of a free bonus for the Age of Conan team.

“How it usually works, is that the next project being worked on (The Secret World) drives the main development of the engine, and then existing live projects like Age of Conan can pick and choose which improvements and features they want to collaborate on and port into their branch of the engine,” he said.

“The main benefit of this to The Secret World, is that the features being collaborated on, like, say, memory usage improvements, loading time improvements and the upcoming single-server technology, get the full development and testing resources of two whole projects focused on them.

“Of course, the benefit to Age of Conan is exactly the same! They get new features they want, and they don’t have to ‘pay’ the full price for them.”

The Secret World is expected on PC in April. 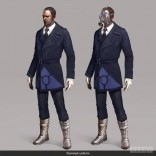