SoulCalibur is back in a big way. Fight fans looking to recreate the arcade experience in their living rooms will be pleased to hear about the Mad Catz Arcade FightStick Soul Edition for Namco Bandai’s weapons-based brawler.

The images below, posted on the Shoryuken.com forum by Mad Catz product manager Mark Julio, show the button lay out and further detailing which looks to be customised for SoulCalibur’s unique fighting style.

“Tago-san, the producer for SOULCALIBUR V told us at E3 2011 that he wanted a stick similar to the SSFIV Chun-Li Tournament Edition FightStick,” Julio noted in his forum post. “We agreed to make something similar; but to make changes/improvements that cater to the fighting game fan and of course the SOULCALIBUR fan”

The arcade stick will be available in North America, Europe and Japan. So far, there’s no word on availability for our antipodean readers.

“In general, I think that guest characters have taken a bit longer to evolve in terms of gameplay; Darth Vader and Yoda took a little more time for players to master in a competitive setting,” Bantegui said. “I don’t think you’ll see that with Ezio. He’s straightforward. You’ll be able to hop right into it, and he’s got one of the easier Brave Edges. And hey, he’s got a crossbow. You can’t beat that!”

In last week’s SoulCalibur V hands-on impressions, I noted that Ezio is certainly a better fit for the series than many of the previous guest characters and talked to Hisaharu Tago about the game’s development.

SoulCalibur V launches next for PS3 and 360 on January 31 in the US and February 3 in Europe. 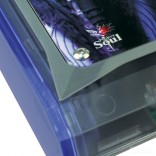