During a StarCraft II panel at BlizzCon, game director Dustin Browder, balance designer David Kim, and senior designer Josh Menke discussed some of the new units included in the expansion, as well as changes being implemented to existing units, and revealed which units would be retired from service.

Browder started the panel off discussing online balance as well as the aforementioned new multiplayer units in Heart of the Swarm.

When the team looked at balancing, it took many things into consideration, such as the differences between light and heavy play, and which style was most prevalent in certain regions. For example, in Korea, the Terran has an advantage over Protoss, while in Europe, it’s the Zerg which has the advantage.

As far as the Zerg’s concerned, Kim said the Zerg have trouble countering a well-entrenched players early in the game. With this, the team decided to retire the Overseer and replace it with the Viper, which is basically a Zerg spellcaster unit.

With the new units, Browder started off discussing the Terran faction units, along with voicing his disappointment with the performance of the Thor, and there not being an option to counter a Protoss late Zealot rush when the charge ability is being used.

However, he said since the Terrans have enough gameplay options, the team didn’t want to give them any extras. So instead, the Hellion will gain a transformation ability.

When the ability is used, the Hellion transforms from fast and lithe, into a slow and tough Battle Hellion.

Shredders, will put out radiation which will cause continuous damage to units near it, but will shut off when an ally is within radiation distance. Warhounds are a faster, smaller version of the Thor which operates as an anti-mech unit. It can be put to best use against Terran or Protoss vehicles in the air or on the ground, and will allow the Thor to become more of a role unit with better damage output.

Players will also be limited to one Thor at a time.

Here is a list of the unit changes coming with Heart of the Swarm, courtesy of GameFront:

With new units and balancing in mind, Chris Metzen, VP of creative development, detailed changes coming with the expansion during a multiplayer panel, and one of the biggest changes is the ability for Banelings to move while burrowed.

The addition of a Corrupter spell which can be cast onto buildings to gather resources called Siphon was announced as well. So now, when a player needs minerals, the won’t necessarily have to build a hatchery.

New Nexus abilities are on the way for Protoss buildings, one of which is Recall which  can pull back a units in trouble. This will allow the Protoss players to be more assertive, and if they find they are getting in over their heads – warp. A new defensive ability which will turn a structure into a photon cannon is also on the way.

Cloaked Ghost will no longer lose energy while cloaked. Instead, a one-time cost will be charged to stay cloaked for a certain amount of time – the cost and duration has yet to be announced, but when cloaked, Ghosts will now regain energy.

With Warhounds as the new anti-air unit, Thors will no longer be used for air-attacks. As mentioned above, players will only be able to have one at a time now.

Below, you will find a  highlight video of the multiplayer panel from the event, as well as some screenshots and art.

Still no exact date for Heart of the Swarm.

Information on the StarCraft II panel was gleaned from the following websites, with out humble thanks: D’toid, Gamespot, PC Gamer, and GameFront. 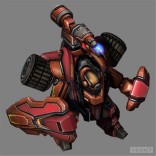