“Hey!” – Navi, everyone’s ‘favourite’ fairy guide, is back. Stace Harman followed her to a recent London-based hands-on event for the remake of one of the most highly rated games of all time.

The Legend of Zelda: Ocarina of Time 3D Edition

It’s the third time OoT is getting a retail release.

Has also appeared on Virtual Console for Wii and iQue Player in China.

Is considered by many to be the greatest game ever, and has the highest score of a game ever on Metacritic with 99.

Broadly speaking, there will be two types of people that will play Legend of Zelda Ocarina of Time 3D: those that have fond memories of Link’s first adventure in 3D, either from the N64 original of thirteen years ago or a more recent port, and those for whom, having missed this much lauded Zelda title for one reason or another, the game will be something of an unknown quantity. It’s this latter group that we envy.

At one end of the room sat a clutch of N64 units hooked up to CRT TV sets and situated in front of comfy beanbags, mirroring many a late nineties bedroom set-up. In addition to delivering up a slice of three-pronged-controller nostalgia, they facilitated a comparison between the original and the updated version that was running on the dozen 3DS units dotted around the room. Ocarina of Time (OoT) on N64 has not aged well and served to make the 3DS version’s visuals look that much crisper, which we suspect may have been partly the point.

The game on the 3DS units had been set up with three save points, set several hours apart, to help get a flavour of different stages of the adventure. Being traditionalists, we headed for the opening sequence in Kokiri Forest and set about exploring the starting locale at the game’s initially sedate pace. The opening hour of the game can be best enjoyed by those that haven’t previously sampled OoT, as the story is set and the Great Deku Tree dungeon explored. For OoT veterans, prior knowledge is a double –edged sword as, knowing how glorious a feeling it is to step out on to the green expanse of Hyrule Field, they’ll likely want to get there as soon as possible.

The basic principles of control have been mapped very well to 3DS. B and A control sword swings and Link’s handy roll move, items can be mapped to X, Y and two touchscreen buttons – with the titular ocarina occupying a further permanent spot on the touchscreen – R raises your shield, which can be angled with the analogue stick, whilst tapping L centres the camera behind Link and holding it locks the targeting on the nearest enemy. That the game was originally designed to work with a single analogue stick means control of Link translates perfectly to this handheld version.

Link has been granted his own hint system – a feature absent from previous versions of OoT.

The 3D effect adds the expected depth-of-field and the 3D-slider provides seamless transition through three main levels of the effect. The game looks crisp running with the 3D effect turned off, whilst mid-level 3D adds just enough to enhance the visuals without suffering too much from a loss of image integrity that you might get if playing the game on a bumpy train or car journey and being unable to hold the console in the pre-requisite head-on position at all times.

One smart, if slightly superfluous, touch is the option to control first-person camera movement when looking around the environment and aiming weapons using 3DS’ gyroscopic sensor. Entering first-person camera mode and panning the 3DS to look around the environment is a nice feature but is unlikely to be used much if playing in public. Furthermore, controlling the camera in this way when the 3D effect is enabled increases the risk of losing image focus if you accidentally tilt the console, rather than panning it. Fortunately, the analogue stick controls the camera precisely and facilitates accurate aiming so there’s little need to use this feature, except for novelty value.

Following the introduction of Nintendo’s Super Guide system in New Super Mario Bros. Wii and the Hint TV and Cosmic Guide systems in Super Mario Galaxy 2, Link has been granted his own hint system – a feature absent from previous versions of OoT.
You’re provided with goal-orientated ‘visions’ via special versions of the Gossip Stones (those things that go ‘boing’ and tell you the time of day when you hit them). Dotted around Hyrule, these Sheikah Stones are larger versions of the Gossip Stones and can be crawled inside, which triggers the hint system and gives a glimpse of where you should be going or how you should go about completing a particular objective.

The new trailer for OoT 3D, released this
morning from Japan.

The system bears a passing resemblance to Mario Galaxy 2’s Hint TV, offering seconds-long snippets of video that might show Link running towards the Temple of Time before cutting to a view from inside the temple and showing him whipping out the ocarina, for example. The system can only be used to reveal hints for locations already visited but are relevant to the current objective. The feature will likely be overlooked by veteran gamers but could be useful for more casual or younger gamers and those who, partway through the game and have become waylaid by Hyrule’s open world/two time zone set-up, forget exactly where they’re meant to be going next. Of course, use of this feature – or vitriolic comment about its inclusion – is the prerogative of each individual gamer.

Having spent some time at various stages throughout the first two thirds or so of the game, our impressions are largely positive. The sign of a great game, one that endures, is that when you return to it after time away or are introduced to it years after release, it still feels relevant: that the level-design is sharp and the updated visuals show little sign of its true age. It appears that everything that made the original one of the most highly-rated games of all time is still here.

Some will feel that, with frequent ports and updates over the years, the game has been milked dry. Fair enough, if you’ve recently played any of the re-releases on Game Cube or Virtual Console there may not be much to lure you back beyond the quirk of seeing a 3D Link in 3D, the inclusion of the Master Quest – which inverts all of the dungeons and beefs up the enemies – and the new Boss Challenge mode which allows you to fight any of the game’s defeated bosses. But for those who haven’t visited since 1998 or who are yet to set foot in Hyrule, Ocarina of Time has plenty to offer.

Running across Hyrule Field towards the castle and bustling market town with the sun setting and classic music playing, it’s hard not to feel like a kid once more. The game retains much of its charm, ready to be discovered for the first time or all over again. Unfortunately, that includes Navi and her incessant demanding of your attention, but that’s just another thing for first time players to find out and for old-hands to love to hate.

The Legend of Zelda Ocarina of Time 3D launches exclusively for 3DS on June 16 in Japan, June 17 in Europe, and June 19 in the US. 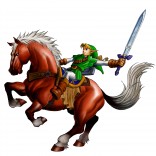