Since the Charr are the main threat to the humans of Ascalon, ArenaNet said it wanted to design something which was not only inhuman, but also “iconic, and intelligent.”

“The original concept for the charr was a race of animalistic creatures that have a variety of forms and functions,” said GW2 artist Katy Hargrove. “Some of these creatures would be brutish brawlers that ran on all four limbs, while others would be more intelligent magic users who would stand on their back legs, performing rituals and holding magic artifacts with their hands.

“Initially we were considering an orc-like race of creatures, but I think everyone soon agreed that we didn’t want to make orcs, ogres, or trolls the main bad guys in our game. They’ve been used in many books, movies, and games, and have been done very well. We needed something different, something that would grab at your gut without needing to be explained.

“In our world, if you are a human, large cats are terrifying. They’ve been eating people for thousands of years, and they come for us out of the trees and the brush and the darkness. So we took a risk and tried concepting cat people. However, the original concepts weren’t impressive, and even came troublingly close to being cute. We began incorporating fire and horns into their designs to push towards a more threatening, demonic feel. We ended up with a fire worshipping race of hell cats. As we fleshed out more of their story we followed through on less of the varied forms than we originally planned, but you can still see remnants of the original design in the stances of the magic-using and weapon-wielding charr in Guild Wars.”

Guild Wars 2 doesn’t have an exact date, but we’re all crossing our fingers for the end of the year or early 2012. 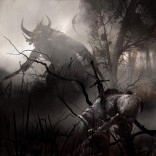